Laser that could speed computer performance

A laser for on-chip optical connections that could give computers a huge boost in speed and energy efficiency has been created by electrical engineers.

Electrical engineers at the University of Wisconsin-Madison and the University of Texas at Arlington have devised a new laser for on-chip optical connections that could give computers a huge boost in speed and energy efficiency.

At just 2 µm in height - smaller than the width of a human hair - the surface-emitting laser’s lower profile could make it cheaper and easier for manufacturers to integrate high-speed optical data connections into the microprocessors powering the next generation of computers. 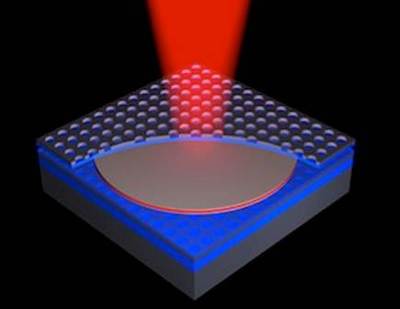 An artist’s representation of the proposed on-chip laser design, created via transfer printing of photonic crystal between layers of silicon nanomembrane.

Traditionally, edge-emitter lasers are considered as the candidate for on-chip optical links. But since mirrors are hard to form in such lasers and because the lasers occupy a large chip area, researchers have been challenged to find a practical way to monolithically integrate the mirrors on silicon chips.

Surface-emitting lasers necessary for high-speed optical links between computer cores could be 20 to 30 µm tall, slightly bigger than one hole in the mesh of a car’s oil filter.

Yet the research team’s engineers say that on a 1.5 µm wavelength optically connected chip, lasers of that size dwarf their silicon surroundings.

“It sits tall on the chip, like a tower,” says Zhenqiang Ma, a UW-Madison professor of electrical and computer engineering. “That is definitely not acceptable.”

Weidong Zhou, a UT Arlington professor of electrical engineering, says one challenge was integrating light into silicon chips, as silicon itself is not an efficient light emitter.

Zhou and Ma have collaborated to shrink on-chip lasers in recent years with funding from the US Air Force Office of Scientific Research, Army Research Office and Defence Advanced Research Projects Agency.

As a solution, the researchers propose replacing layers and layers of reflectors necessary in the traditional distributed Bragg reflector laser design with two highly reflective photonic crystal mirrors. Composed of compound semiconductor quantum well materials, each mirror is held in place with silicon nanomembranes, extremely thin layers of a silicon.

Zhou says integrating compound semiconductor quantum wells with silicon is a promising approach. “We apply a nanomembrane transfer printing process to accomplish this goal,” he says.

One layer of photonic crystal is equal to about 15 to 30 layers of dielectric reflectors found in conventional lasers. As a result, manufacturers could fabricate 2 µm-high lasers for data links with performance that could equal current designs.

In addition to their larger size, reflectors for conventional lasers are made of materials grown only at very high temperatures, which means they can damage the chip they are placed on during production. Since fabrication via transfer printing can occur at much lower temperatures, Zhou and Ma hope their laser design can be used to place optical links on silicon chips with much less wasted material, time and effort.

Optical data links already exist at the largest scales of data networks - the internet’s backbone is composed mainly of fibre-optic links between countries, cities and houses. But currently, that data moves over to slower metal connections and wiring as it travels from a regional hub to a house, a computer and eventually between the CPU cores within of the processor powering a machine.

“In the future, you’ll see a move to optical at each step,” Ma says. “The last step is within the chip, module to module optical links on the chip itself.”

The two hope to implement their production process in functional on-chip photonic crystal membrane lasers that could eventually be part of the next-generation, high-speed computer processors.

“We believe this laser will be used to make data links more practically available,” Ma says.

“It is truly an interdisciplinary team effort,” Zhou says. “The co-existence of photonics with electronics on the chip level shall enable multifunctional, energy-efficient super-chips for applications in computing, communications, sensing, imaging and so on.”