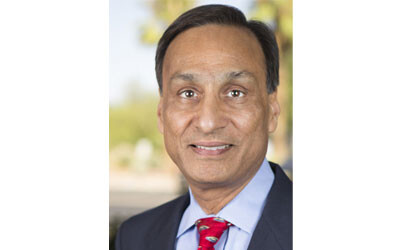 The Global Semiconductor Alliance (GSA) will honour technologist and business leader Steve Sanghi, Executive Chair of Microchip Technology, with its prestigious Dr Morris Chang Exemplary Leadership Award at this year’s Annual Awards Celebration on 8 December 2022. Established in 1999, the Dr Morris Chang Exemplary Leadership Award is the highest achievable honour through the GSA. The award recognises individuals for their exceptional contributions, exemplifying how their vision and global leadership have transformed and elevated the semiconductor industry.

Jodi Shelton, co-founder and CEO of GSA, said that Sanghi is a leader and visionary in the semiconductor industry, adding that Sanghi was recognised for his exceptional business acumen and far-reaching respect among the technology industry and business community. “I had the pleasure of working closely with Steve during his tenure on GSA’s board of directors and I am delighted to honour Steve’s distinguished career and add to his legacy with GSA’s Dr Morris Chang Exemplary Leadership Award,” Shelton said.

Sanghi serves as Executive Chair of Microchip and Chairman of the Board of Directors. Spending more than 30 years as Microchip’s President and CEO, Sanghi led the company’s transformation while nurturing its culture. Sanghi’s foundation of long-term success for Microchip involved fostering employee empowerment along with his commitment and investment to creating a strong leadership pipeline and promoting from within. Several members of the leadership team at Microchip started with the company as interns and new college graduates and today are vice presidents and senior vice presidents.

“I’m humbled by the honour of receiving this year’s Dr Morris Chang Exemplary Leadership Award, and to be recognised alongside all the other distinguished semiconductor industry leaders. Through our collective efforts, the semiconductor industry has unquestionably made the world a better place. It has been the privilege of my career to lead the Microchip team and to empower the innovation of thousands of customers who in turn have dramatically enhanced the human experience,” Sanghi said.

Sanghi was named the Executive of the Year by EE Times and received the Arizona Technology Council’s Lifetime Achievement Award in 2010. He has also been listed on the Phoenix Business Journal’s annual list of the Most Admired CEOs, been named a 2009 recipient of Arizona State University’s Distinguished Achievement Award, and recognised as Arizona Entrepreneur of the Year by Ernst & Young. Under Sanghi’s leadership, Microchip won numerous awards, including the Industry Leaders of Arizona award in 2015, the Alfred P. Sloan Award for Business Excellence in Workplace Flexibility for the past eight straight years, the Phoenix Business Journal’s ‘Best Places to Work’ for four consecutive years and the Arizona Business Leadership Award in 2010. Sanghi earned his Masters of Science degree in Electrical and Computer Engineering from the University of Massachusetts and his Bachelor of Science degree in Electronics and Communication from Punjab University, India.

This year’s GSA Awards Celebration is forecast to attract more than 1500 leaders to celebrate the accomplishments of this industry and honour the best-performing companies and top leaders. Each year the GSA recognises companies that have demonstrated excellence through their vision, strategy, execution and future opportunity. The celebration honours the achievements of semiconductor companies in several categories, from outstanding leadership to financial accomplishments, as well as overall respect within the industry.