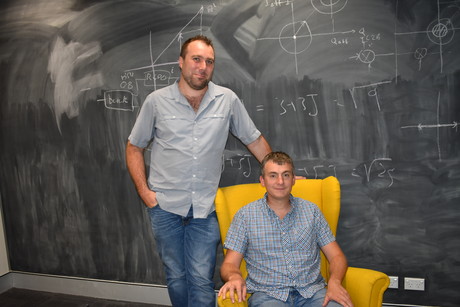 Morse Micro was founded in 2016 by Wi-Fi chip designers Andrew Terry and Michael De Nil (pictured), whose mission was to develop a new breed of ultralow-power Wi-Fi chips with extended range suitable for the IoT. The company was initially funded by Startmate and a group of angel investors in December 2016, and raised a $4.5 million seed round in October 2017 from Main Sequence Ventures, PAN Group Australia and Blackbird Ventures. After nearly three years of development, the design phase is complete and Morse Micro is getting ready for mass production.

The latest funding round was led by Ray Stata and Main Sequence Ventures, CSIRO Innovation Fund, with participation from Skip Capital, Blackbird Ventures, Right Click Capital, Uniseed and the Clean Energy Innovation Fund. Main Sequence Ventures was particularly keen to co-lead a second time, with partner Mike Nicholls stating, “Since funding their seed round in 2017, the team has outperformed on both product delivery and customer business development. This, combined with the fact that the new chip fills a gap in a number of fast-growing segments, gave us the confidence to invest further.”

Terry claims this overperformance resulted from a tailored approach to product development and market fit, saying, “Designing for the IoT is challenging as the requirements are very different to other markets. So we started from scratch and designed an architecture specifically suited to the demands of the IoT and to the various markets where its many applications were most suited.”

Morse Micro’s chip uses a 900 MHz radio band which features extended range and lower power consumption compared to the 2.4 and 5 GHz bands used by conventional Wi-Fi. This is because lower frequencies allow the signals to reach further and pass through objects better, all while using less power.

In addition to this, Morse Micro’s chip also supports high bandwidths and very large networks: over 8000 devices can be connected to a single access point, with data rates of many megabits per second. This enables its use in a wide range of applications beyond the traditional IoT use cases of smart homes and sensor networks, including industrial controls, asset management, video, retail signs and displays.

Further to funding mass production, the latest cash injection will be used to double Morse Micro’s team size across multiple local and overseas markets, and move its headquarters from Eveleigh to Sydney’s CBD to accommodate its ambitious growth plans for 2019 and beyond. Stata, founder and Chairman of semiconductor multinational Analog Devices, has meanwhile been appointed to the company board, joining Terry, De Nil and Nicholls.

Stata said Sydney is an ideal location for Morse Micro to headquarter its operations, given its “historic roots in Wi-Fi”. He also described Terry and De Nil as “two of the industry’s most talented and experienced Wi-Fi chip designers”.