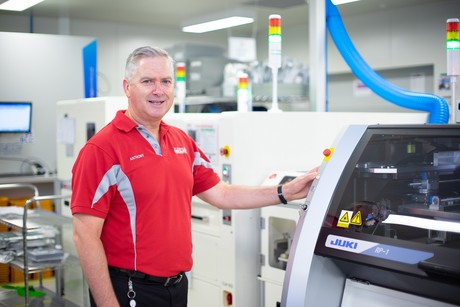 South Australian advanced electronics manufacturing firm REDARC has significantly expanded its headquarters in Lonsdale, Adelaide — a move that is expected to create over 100 specialist jobs over the next five years.

REDARC was established in 1979 and is involved in the research, design, development and manufacture of a range of electronic voltage converters and associated products, inverters, power supplies, battery chargers, brake controllers and trailer braking products. Having grown in recent years by targeting the North American and European automotive aftermarket, the company is now actively diversifying into other markets, including defence and medical devices.

As part of this expansion, REDARC has undergone a $22 million development that has resulted in the creation of an additional 3000 m2 of advanced manufacturing space. This will enable REDARC to increase its manufacturing capacity by 250% and increase productivity and expand its current workforce of almost 200 to 300 by 2024, with most of the new positions being filled by engineers, data scientists and algorithm specialists.

As noted by REDARC Managing Director Anthony Kittel, the upgrade was supported by a $2.5 million Next Generation Manufacturing Investment Program grant from the federal government. He revealed, “In addition to expanding the facility, the grant has been used to purchase state-of-the-art machinery and testing and validation equipment to enable us to exceed international standards.

This includes the purchase of a new surface mount technology line for loading electronic components, an electromagnetic compatibility chamber and a vibration test lab that enables highly accelerated lifetime testing of products that can simulate 10 years of life in just two days. Three new universal collaborative robots (cobots) have also been purchased.

“The new equipment will provide REDARC with the best available technology, enabling us to enhance export capabilities and assist with our diversification program,” Kittel said.

Pyne said the expanded facility, which will be the home of advanced electronics manufacturing in the defence, automotive and mining sectors, is an exciting boost to the South Australian economy.

“The upgraded facility will allow REDARC to develop innovative products across a range of industries including defence — and to further expand its operations both domestically and internationally,” he said.

Minister for Defence Industry Steven Ciobo has also congratulated REDARC on the opening of the new facility, calling it “yet another vote of confidence in Australia’s defence industry”.

Pyne and Ciobo also congratulated REDARC for winning the Defence Teaming Centre ‘Resilient and Adaptive’ award in November, which recognised its commitment to transformation, sustainability and innovation. The company last year installed a 100 kW solar power plant and Tesla Battery bank at its Lonsdale plant, which involved the installation of 370 solar panels capable of generating 140 MWh of energy per year.