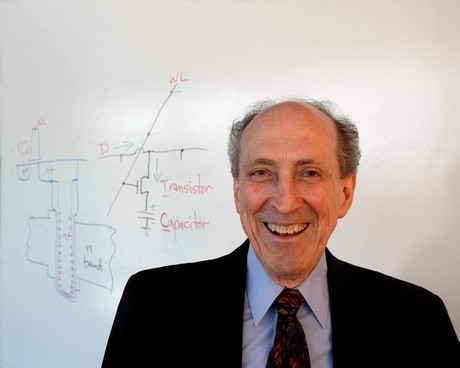 Robert H Dennard, the inventor of DRAM and IBM Fellow Emeritus, has been presented with the semiconductor industry’s top honour, the Robert N. Noyce Award, in recognition of the breakthroughs he made in semiconductor technology.

The award is given annually by the Semiconductor Industry Association (SIA) in recognition of a leader who has made outstanding contributions to the semiconductor industry in technology or public policy.

Dennard invented the dynamic random access memory (DRAM) cell in 1966 and was granted a patent for his one-transistor DRAM in 1968. By the mid-1970s, DRAM was standard in most computers.

The result of Dennard’s invention are single chips that today can hold 16 gigabits.

“Dr Dennard is a semiconductor industry icon, inventing the memory technology underpinning every computer, smartphone, tablet and other electronic devices that are so ubiquitous in modern society,” said John Neuffer, SIA president and CEO.

“Bob also pioneered the scaling physics that have allowed the semiconductor industry to produce exponentially more advanced products at lower cost. Bob’s contributions have revolutionised our industry and transformed modern technology for the better.”

Dennard also led the development of metal-oxide-semiconductor field-effect transistors (MOSFET) scaling rules. He and his colleagues were among the first to recognise the tremendous potential of downsizing MOSFETs, showing that integrated circuits would perform faster with much lower energy consumption as transistors, wires and circuit voltage were made smaller.

It is this property that underpins Moore’s Law.

Dennard’s work has resulted in 75 patents, more than 100 published papers and numerous awards.

“As gratifying as my career’s work has been, I’m most proud of the collaboration and relationships built with people I’ve worked alongside to advance semiconductor technology,” Dennard said.