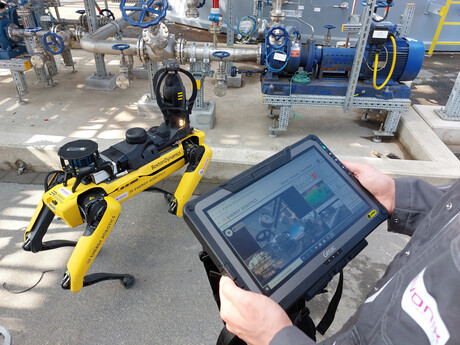 Evonik, a global leader in the specialty chemicals industry, is using an autonomous robot to conduct maintenance and inspection tasks in critical areas at one of its company-owned chemical plants, as part of an innovation project with three other partners. The aim of the project is to evaluate the practicality of an automated robotic maintenance and inspection solution in the chemical industry.

Evonik relies on Getac’s F110 ATEX-certified tablet to control the robot and teach it automated inspection routes around the facility, which the company said it chose due to its powerful performance and reliability compared to other rugged computing alternatives. In addition, Getac’s fast response and high degree of flexibility while integrating the solution were key factors in creating an optimal working environment for the proof of concept. The robot’s software was provided by Energy Robotics, while the robot itself was supplied by Boston Dynamics.

The robot’s primary task is to travel along pre-programmed inspection routes, collecting important operational data. It will also conduct automated safety inspections that cannot be integrated into a remote maintenance concept (or only at great expense). Organisations can then use data collected to improve the intervals between inspections while simultaneously increasing asset reliability.

Getac’s tablet plays a pivotal role in the project, serving as the main interface between robot, control software and human operator. For control and monitoring in the plant, the operator can access the software via the F110-EX, while an additional controller is used for quick interventions during operation.

“The robot receives its orders through the Getac F110-EX, which can also be used to control it during corresponding missions, such as in the tank farm,” said Thorsten Schimpf, a process expert at Evonik. “The robot is equipped with sensors, as well as infrared and optical cameras, allowing it to navigate to specific locations within the facility and take photos of displays or record data, which can then be transmitted back for evaluation.”

For effective operation, Schimpf said, Evonik required a portable rugged device with enough power to display video feeds from the robot in real time. The tablet needed to be highly robust and ATEX certified, with a screen that is easy to read outdoors — under a wide range of environmental conditions including rain — and fully functional in both hot and cold temperatures. Evonik also required a Windows operating system, as well as the ability to capture and process large amounts of data both quickly and effectively.

Connectivity and performance play a key role as well, allowing for fast video transmission and playback. In addition, an LTE connection is required because there is no WLAN in the tank farm. Finally, Bluetooth is needed to connect the controller to the tablet. With the appropriate Getac carrying strap, the tablet can be carried comfortably in front of the body, so the user has both hands free to operate the controller at the same time.

“Evonik not only recognised Getac as a good solution, but Getac responded immediately to our enquiry, was able to help quickly and offered the right solution for our needs,” Schimpf said. “The F110-EX is extremely reliable and failsafe; it works flawlessly and meets our very high requirements for performance, functionality and connectivity.

Eric Yeh, Managing Director at Getac Technology, concluded, “The Getac F110-EX is based on state-of-the-art rugged technologies, making it ideally suited to Evonik’s ambitious project. We are very pleased to be able to contribute to the project’s success and look forward to working closely with Evonik on similar initiatives in the future.”

Winmate's M140TG features a large screen with optical bonding technology and an anti-glare...

duagon introduces the G28, a 3U CompactPCI serial CPU board featuring the 11th generation Intel...