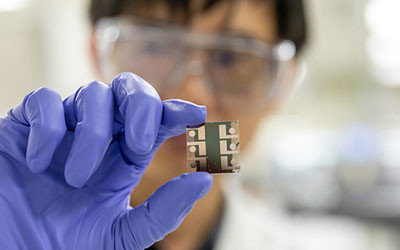 Inverted perovskite solar cells can now achieve efficiencies close to that of their more conventional counterparts, according to researchers from the King Abdullah University of Science and Technology (KAUST). Published in the journal Nature Energy, their discovery could lead to perovskite solar panels that have operational lifetimes and light-capturing efficiencies that rival traditional silicon solar panels but are significantly simpler, less energy-intensive and less expensive to make.

Metal halide perovskite solar cells have jumped from power conversion efficiencies of 3.8% to 25.2% in just a decade, with research leader Osman Bakr noting, “Conventional perovskite solar cells, with their component layers arranged in an ‘n-i-p’ structure, offer the highest efficiencies.” However, these devices require ionic dopants, which are unstable and shorten the solar panel’s lifetime.

Working in collaboration with researchers from the University of Toronto, Bakr and colleagues have now significantly improved inverted perovskite cell efficiency. By adding long-chain alkylamine ligands (AALs) into the mixture during perovskite production, the team created an inverted perovskite solar cell with enhanced stability and with efficiency of 22.3%.

“Just a trace amount of alkylamine was enough to improve the structural and optoelectronic properties of the perovskite in multiple ways,” Zheng said. 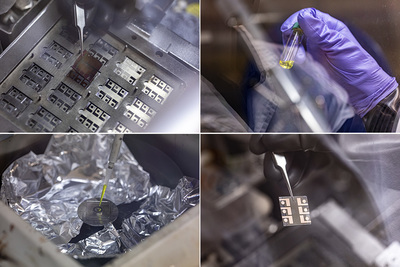 “In the next stage of our research, we will scale up the production of perovskite cells to achieve a high-performance and market-ready product,” Zheng said. “Developing a scalable method for creating large-area, high-quality perovskite films on different surfaces, including flexible substrates and silicon wafers, will overcome the key remaining hurdle to commercialisation.”

Top image: The team created an inverted perovskite solar cell with enhanced stability and with efficiency of 22.3%. Image ©2020 KAUST.

Fruit peel waste can be used to extract and re-use precious metals from spent lithium-ion...

The EPIC project aims to accelerate the drying of high-quality electrodes for lithium-ion...

A newly developed electrocatalyst for hydrogen fuel cells does not require a carbon carrier and...