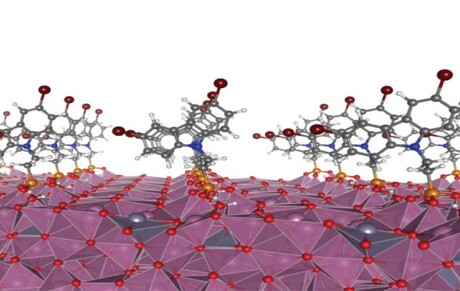 An electrode coating just one molecule thick can significantly enhance the performance of an organic photovoltaic cell, according to researchers from the King Abdullah University of Science and Technology (KAUST). Described in the journal ChemSusChem, the coating outperforms the leading material currently used for this task and may pave the way for improvements in other devices that rely on organic molecules, such as light-emitting diodes and photodetectors.

Unlike the most common photovoltaic cells that use crystalline silicon to harvest light, organic photovoltaic cells (OPVs) rely on a light-absorbing layer of carbon-based molecules. Although OPVs cannot yet rival the performance of silicon cells, they could be easier and cheaper to manufacture at a very large scale using printing techniques.

When light enters a photovoltaic cell, its energy frees a negative electron and leaves behind a positive gap, known as a hole. Different materials then gather the electrons and holes and guide them to different electrodes to generate an electrical current. In OPVs, a material called PEDOT:PSS is widely used to ease the transfer of generated holes into an electrode; however, PEDOT:PSS is expensive and acidic, and can degrade the cell’s performance over time.

Looking to develop an alternative to PEDOT:PSS, the KAUST team used a much thinner coating of a hole-transporting molecule called Br-2PACz, which binds to an indium tin oxide (ITO) electrode to form a single-molecule layer. The organic cell using Br-2PACz achieved a power conversion efficiency of 18.4%, whereas an equivalent cell using PEDOT:PSS reached only 17.5%.

“We were very surprised indeed by the performance enhancement,” said PhD student Yuanbao Lin, a member of the team. “We believe Br-2PACz has the potential to replace PEDOT:PSS due to its low cost and high performance.”

Br-2PACz increased the cell’s efficiency in several ways. Compared with its rival, it caused less electrical resistance, improved hole transport and allowed more light to shine through to the absorbing layer. Br-2PACz also improved the structure of the light-absorbing layer itself, an effect that may be related to the coating process.

The coating could even improve the recyclability of the solar cell. The researchers found that the ITO electrode could be removed from the cell, stripped of its coating and then reused as if it was new. In contrast, PEDOT:PSS roughens the surface of the ITO so that it performs poorly if reused in another cell.

“We anticipate this will have a dramatic impact on both the economics of OPVs and the environment,” said research leader Thomas Anthopoulos.