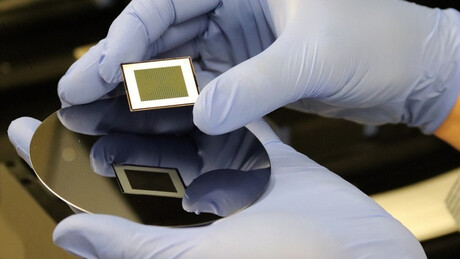 Scientists at The Australian National University (ANU) have produced a more efficient type of solar cell that generates power on both the front and the back sides, setting a new world record in the process. The so-called bifacial solar cells can easily beat the performance of single-sided silicon solar cells, according to principal investigator Dr Kean Chern Fong.

“We have developed what I would call a true bifacial solar cell, as it has nearly symmetrical power generation capacity on both surfaces of the device,” Dr Fong said.

“When deployed on a conventional solar farm, a bifacial cell absorbs direct incoming light, while also taking advantage of ground reflection, which can contribute up to additional 30% power generation.

“Bifacial solar cells are becoming increasingly important in the rollout of solar farms and are expected to have a market share of over 50% in the next five years.

“Our work demonstrates the incredible capabilities of this technology.”

The team used specific laser doping technology to fabricate the cells. As explained by chief investigator Dr Marco Ernst, this means lasers were used to locally increase electrical conductivity. It is a low-cost, industry-compatible process for boosting solar cell efficiency, he said.

“This is a world record for selectively laser-doped solar cells and among the highest efficiency bifacial solar cells,” Dr Ernst said.

The results have been independently verified by the CSIRO.