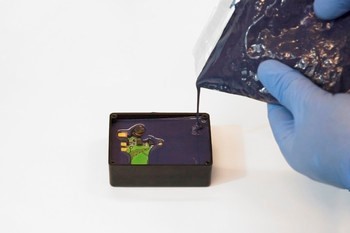 Extreme environmental conditions are often encountered in the bid to offer protection for PCBs. How do resins offer this protection?

There are a number of different factors that influence the way resins provide protection. The act of encapsulating a component or PCB means that it is surrounded by a layer of resin, which, since it is normally done in a single operation, completely seals a component or an entire PCB from the environment in which it operates.

A two-part resin, when mixed, starts a chemical reaction which results in the resin becoming fully polymerised to provide a homogenous layer. The polymerisation reaction creates a three-dimensional structure which provides a barrier against chemical attack and high humidity, for example, and even physical shocks and the destructive effects of thermal cycling.

Under less extreme conditions, is a resin still the best option or should a coating be considered as an alternative? What pointers will assist a design engineer to make the choice between these two approaches?

This is an interesting point as the protection provided by a coating offers a number of advantages over the application of a resin. However, as always, the choice will depend upon what level of protection the designer requires; as a general rule of thumb, to ensure the highest levels of protection, resins are, on the whole, superior to coatings.

A note of caution here: if weight or volume is a paramount consideration, then a coating is preferred as this is likely to provide adequate protection while ensuring minimal weight/volume increase. On the other hand, if you need to protect your intellectual property and avoid the underlying circuit being copied, then a resin will not only provide excellent protection due to its toughness, chemical resistance and adhesion to the substrate and components, but with pigmented resins, its opacity will ensure that the circuit detail is visually obscured. It is well to remember that some filled resins are also X-ray opaque!

Silicone resins have the broadest continuous operating temperature range of any of the resin chemistries that we currently offer, so they are a natural choice for both high- and low-temperature applications. They maintain their flexibility over this temperature range with very little signs of degradation over time. Due to their high flexibility, they place very low stresses on delicate components, particularly those with weak and fragile connecting legs.

There is, however, a downside to silicones, particularly the effectiveness of their adhesion to certain substrates. Moreover, their chemical resistance is not as good as that provided by an epoxy resin. Another category of resins — polyurethanes — would be the better choice for applications operating in the -30 to +120°C region as these offer similar levels of flexibility and better adhesion to many substrates — and all for a lower price.

How do resins work to reduce damage to PCBs from vibration?

Due to the crosslinking that takes place during the curing of the resin, a three-dimensional structure is created which can absorb stresses and strains and help to distribute the forces involved over a larger volume. By doing so, the magnitude of the forces acting upon a particular component is considerably reduced compared to that of a non-potted component. The same reasoning applies to both physical and thermal shocks. In these cases, the thicker the resin layer applied, the greater the level of protection that is provided.

Optically clear resins are ideal for LED applications (for example protection of the LED itself) — why is UV stability so important for these resins?

For LED lighting units — particularly those installed outdoors and in all weathers — UV radiation is a fact of life, and the single greatest source is the Sun. The majority of resins have an aromatic backbone (they contain benzene rings), which will turn yellow when exposed to UV light. They will then start to break down over time as the processes that cause yellowing also result in the formation of free radicals, which leads to the breaking of chemical bonds within the structure.

Resins with an aliphatic backbone do not contain aromatic (benzene) rings, and are less likely to turn yellow and subsequently deteriorate. Free radicals are still formed within aliphatic resins, but at a much lower concentration and they do not have as many sites to attack compared to aromatic resins.

Of course, while being the main source of UV light on Earth, the Sun is not alone in emitting this potentially damaging radiation. Artificial light sources (tungsten, fluorescent, metal halide, for example) all emit certain levels of UV light, which can attack the resin, not to mention the LEDs themselves, which also generate some UV radiation.

Hopefully, the foregoing has been a useful overview of some of the most common enquiries we receive from customers and a further insight into the effectiveness of resin chemistries. Do feel free to get in touch with any of your own queries regarding resins. We also have a number of similar articles available on www.electrolube.com/blog which may be of interest to you. Until next time, folks.

Jade Bridges highlights the use of LEDs in various environments and introduces how to specify...

Getting the best performance from resin encapsulants

In this article on resin potting and encapsulation, resins expert Alistair Little expands on a...

The positive outcomes of antistatic flooring

State-of-the-art technology can achieve incredible things — but only if each and every...