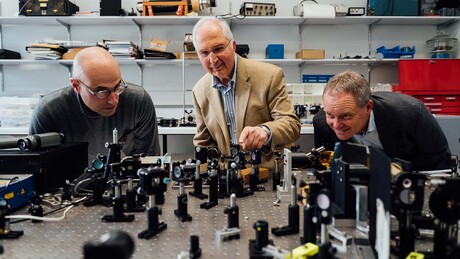 The Australian Government has provided a $2.5 million grant for an academic–industry partnership, led by the Australian National University (ANU), to help to ensure that Australian-made satellites and other sensitive electronic equipment will operate correctly in space.

The grant was provided through the Space Payload Qualification Facilities component of the Australian Space Agency’s Space Infrastructure Fund, which addresses gaps in Australia’s space infrastructure to increase the nation’s space capability. The funding will enable the ANU and its space research partners to establish a National Space Qualification Network (NSQN), enabling facilities to test payloads, components and hardware prior to their use in harsh environments of space.

Minister for Industry, Science and Technology Christian Porter said creating an end-to-end testing capability will save space manufacturers both time and money, as they will no longer have to send sensitive equipment offshore to ensure it meets Australian and international standards.

“Australia already has a range of sophisticated testing facilities that can simulate the vacuum, extreme temperatures, vibrations and g-forces encountered during space missions that can cause electronic equipment to fail or malfunction,” Porter said.

“But an audit conducted last year by the Australian Space Agency identified gaps in our testing network, including the lack of a specialist ionising radiation testing facility.

“The funding provided through this grant will enable us to establish this capability within Australia, making it easier and cheaper for local businesses to qualify their products for sale into global and domestic supply chains.”

The funding will bring together the work of six partners: ANU, Nova Systems, the Australian Nuclear Science and Technology Organisation (ANSTO), Steritech, the University of Wollongong (UOW) and Saber Astronautics. The bulk of the funding will go to the Heavy Ion Accelerator Facility at ANU, allowing tech — including components destined for space, like computers and other devices — to be tested against extreme radiation.

The funding will also help to establish Australia’s first dedicated space-focused ‘pyroshock’ testing capability at the ANU’s Mount Stromlo space testing centre, which measures the impact that the explosive forces generated during stage separation of rockets can have on payloads. The rest of the money will be used to upgrade the National Space Test Facility at ANU, and to support the work of the network partners:

“Upgraded facilities will mean we can make sure the payloads we send into space, including satellites and spacecraft, are able to survive before they blast off,” said Professor Anna Moore, Director of the ANU Institute for Space.

“Testing space payloads, components and spacecraft before they are launched into space helps make space missions more successful. One key threat to satellites is radiation.

Prof Moore said many Australian companies are looking to “pivot to space”, and the new national network of facilities will make sure their products are space ready.

“This funding and national network of upgraded facilities will make it easier to do that,” she said.

“Australian companies who have never worked on space can now cast their gaze upwards and to the final frontier; developing and testing components and hardware that are vital to the success of space missions before they leave the planet.

“This funding will help transform Australia into a world-leading space qualification ecosystem with reach across the Indo–Pacific region.”

The Australian Government has already committed more than $700 million to support the space sector’s growth, with the aim of tripling its size to more than $12 billion by 2030.

“That growth will help to generate an additional 20,000 highly skilled and high-paid jobs within the space sector and allied manufacturing industries, providing a bright future for young Australians looking for rewarding careers at the forefront of scientific research,” Porter said.

Enrico Palermo, Head of the Australian Space Agency, said the NSQN will bring a more commercial focus to space qualification.

“While the network will be spread across six states and territories, it will have a single point of entry for businesses, ensuring a simple and seamless experience and a strong commercial focus,” Palermo said.

“By creating this service, we also believe that we can make Australia a highly desirable testing destination for overseas space manufacturers, generating more money for research and helping to boost our domestic economy.”

Researchers have developed a method that can simultaneously locate individual electrical flaws in...