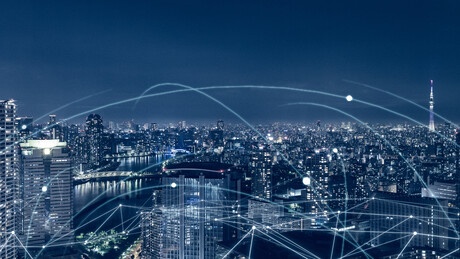 Digital coherent technology is a transmission method that combines digital signal processing and coherent reception. Coherent reception is a technology that makes it possible to receive the amplitude and phase of light by causing interference between a light source placed on the receiving side and the received optical signal. In this experiment, NTT developed an ultra-wideband baseband amplifier IC module and digital signal processing technology that can compensate for distortion in the optical transceiver circuit with high accuracy.

NTT then demonstrated the transmission and reception of digital coherent optical signals exceeding two Tbits/s per wavelength and succeeded in a 240 km optical amplification repeater transmission experiment of an optical signal of 2.02 Tbits/s. This result suggests that further scalability of digital coherent optical transmission technology can achieve a large capacity per wavelength – which is more than double the conventional level – and a long transmission distance. This core technology is expected to lead the development of the All-Photonics Network of the IOWN and 6G initiatives.

Communication traffic is predicted to increase in the future, due to the proliferation of 5G services to address various social issues and the development of IOWN and 6G services. The All-Photonics Network, which is IOWN’s backbone optical communication network, must cost-efficiently achieve even greater capacity. In the future, to economically transmit ultra-high-speed Ethernet signals of 1.6 terabits per second or more over long distances, NTT hopes to achieve long-distance optical transmission of more than two Tbits/s per wavelength by expanding the transmission capacity per optical signal wavelength and the signal symbol rate, thereby optimising the amount of information per signal.

To expand the transmission capacity per wavelength, it is necessary to overcome the speed limit of silicon complementary metal oxide (CMOS) semiconductor circuits. CMOS are used to realise large-scale functions such as CPU as a structure to realise a semiconductor integrated circuit. This type of circuit is often used for transmission and reception of large-capacity optical transmission because of the amount of signal is large. Although the speed is increasing due to miniaturisation, compound semiconductors are superior in terms of high speed.

To date, NTT has been researching and developing optical transmission systems and integrated devices using band doubler technology that overcomes the speed limit of silicon CMOS using AMUX and has succeeded in generating optical signals with symbol rate exceeding 100 gigabaud. However, to realise optical transmission of multi-terabits per second or more, it is necessary to achieve a wider bandwidth and higher output of the electrical amplifier (driver amplifier for driving the optical modulator) in the optical transceiver. In addition, as speeds continue to increase, there is a demand for technology that can compensate for deviations from the ideal optical transmission/reception circuit (differences in signal path length, loss variations due to signal paths, etc.) with high accuracy.

Now, NTT has demonstrated the transmission and reception of a digital coherent optical signal exceeding two Tbits/s per wavelength (Figure One, left) and conducted an optical amplification repeater transmission experiment of 2.02 Tbits/s over 240 km (Figure One, right). The team achieved this through the advanced fusion of NTT’s original ultra-wideband baseband amplifier IC module and ultra-high-precision digital signal processing technology.

NTT has been researching and developing an ultra-wideband baseband amplifier IC based on InP-based heterojunction bipolar transistor (InP HBT) technology and equipped with a 1 mm coaxial connector that supports frequencies up to 110 GHz. The company has succeeded in creating a module that is mounted in a package and has ultra-wideband performance (Figure Two, left) and sufficient gain and output power (Figure Two, right). It has currently applied this baseband amplifier IC module as a driver amplifier for driving an optical modulator.

When the IC module is used as a driver amplifier for driving an optical modulator, it must operate in a high-power output range, so the nonlinearity of the driver amplifier output (where the output power is not proportional to the input power) becomes a problem and the optical signal quality (signal-band-noise ratio) deteriorates. In addition, with ultra-high-speed signals, degradation of signal quality becomes noticeable due to deviation from the ideal inside the optical transceiver. In this experiment, NTT’s digital signal processing technology compensated for non-linear distortion generated in the modulator driver and the deviation from the ideal inside the optical transceiver with ultra-high precision. NTT expanded the operating range of the IC module and succeeded in improving the optical signal quality (Figure Three). 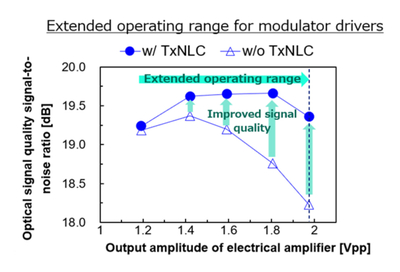 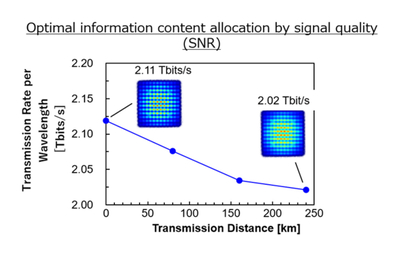 This technology is expected to enable reliable transmission of large-capacity signals by multiplexing optical signals exceeding two Tbits/s per wavelength. In particular, technology for increasing the modulation speed of optical signals contributes to increasing the capacity per wavelength and also generates large-capacity signals when combined with wavelength resource expansion technology, as shown in Figure Five. The technology is also expected to enable long-distance transmission. 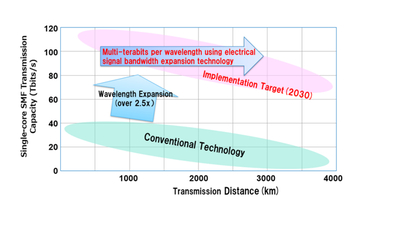 NTT will promote research and development by continuing the integration of its own device technology, digital signal processing technology, and optical transmission technology toward the realisation of an All-Photonics Network of the IOWN and 6G initiatives.

Researchers have developed a method that can simultaneously locate individual electrical flaws in...

The $2.5 million grant will help to ensure that Australian-made satellites and other sensitive...