Rose madder - a natural plant dye once prized throughout the Old World to make fiery red textiles - has found a second life as the basis for a new ‘green’ battery.

Purpurin, a dye extracted from the roots of the madder plant (Rubia species), has been used to power a non-toxic and sustainable lithium-ion battery developed by chemists from The City College of New York teamed with researchers from Rice University and the US Army Research Laboratory. 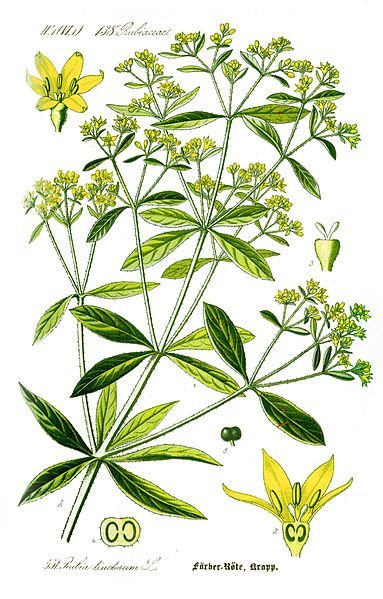 Scientists at Rice University and City College of New York are making organic elements for lithium-ion batteries from the root of the madder plant, historically used as a red dye. Image credit: Creative Commons/Wikipedia.

Civilizations in Asia and the Middle East first boiled madder roots to colour fabrics in vivid oranges, reds and pinks more than 3500 years ago. In its latest technological incarnation, the climbing herb could lay the foundation for an eco-friendly alternative to traditional lithium-ion (Li-ion) batteries.

Purpurin, left, extracted from madder root, centre, is chemically lithiated, right, for use as an organic cathode in batteries. The material was developed as a less expensive, easier-to-recycle alternative to cobalt oxide cathodes now used in lithium-ion batteries. Photo credit: Ajayan Lab/Rice University.

Most Li-ion batteries today rely on finite supplies of mined metal ores, such as cobalt. “Thirty per cent of globally produced cobalt is fed into battery technology,” noted Dr Leela Reddy, lead author and a research scientist in Professor Pulickel Ajayan’s lab in the Department of Mechanical Engineering and Materials Science at Rice University. The cobalt salt and lithium are combined at high temperatures to make a battery’s cathode, the electrode through which the electric current flows.

Production and recycling also pumps an estimated 72 kilograms of carbon dioxide into the atmosphere for every kilowatt-hour of energy in a Li-ion battery, he noted. These grim facts have fed a surging demand to develop green batteries, said Dr Reddy.

Fortunately, biologically-based colour molecules, like purpurin and its relatives, seem pre-adapted to act as a battery’s electrode. In the case of purpurin, the molecule’s six-membered (aromatic) rings are festooned with carbonyl and hydroxyl groups adept at passing electrons back and forth, just as traditional electrodes do. “These aromatic systems are electron-rich molecules that easily coordinate with lithium,” explained Professor John.

Moreover, growing madder or other biomass crops to make batteries would soak up carbon dioxide and eliminate the disposal problem - without its toxic components, a lithium-ion battery could be thrown away.

Best of all, purpurin also turns out to be a no-fuss ingredient. “In the literature there are one or two other natural organic molecules in development for batteries, but the process to make them is much more tedious and complicated,” noted Professor John.

Made and stored at room temperature, the purpurin electrode is made in just a few easy steps: dissolve the purpurin in an alcohol solvent and add lithium salt. When the salt’s lithium ion binds with purpurin the solution turns from reddish yellow to pink. Remove the solvent and it’s ready. “The chemistry is quite simple,” co-author and City College postdoctoral researcher Dr Subbiah Nagarajan explained.

The team estimates that a commercial green Li-ion battery may be only a few years away, counting the time needed to ramp up purpurin’s efficiency or hunt down and synthesise similar molecules. “We can say it is definitely going to happen, and sometime soon, because in this case we are fully aware of the mechanism,” said Professor John.

“When you can generate something new or unheard of, you think of chemistry in a different way,” he added. “That a natural material or dye can be used for a battery, that is exciting, even for me.”

The team reported its results in the journal Nature’s online and open access publication, Scientific Reports, on 11 December 2012.

Elite athletes want to return to match play as quickly as possible after injury. As a result,...

We've all met 'em. Those blundering, inconsiderate idiots walking our pavements with...

We’re all familiar with the old ‘break-fix’ model of service - it’s...