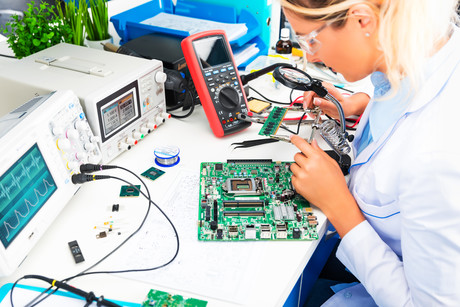 An essential part of building a prototype is creating a printed circuit board (PCB), assembling components onto the board and testing the assembly to make sure everything works the way it is supposed to. To do this, an engineering team must design the circuit, create a board layout, and either fabricate the board or send it out for fabrication (Figure 1, above).

Many services now offer low-cost custom board fabrication with quick turnaround. The real challenge is creating a good PCB board design. Although some engineers will jump directly into designing a PCB layout, this is never a good idea. It creates less than optimum designs, and in the case of a complex project the results can be disastrous. The better approach is to develop a schematic first.

Schematics and PCB board designs are not the same thing. Schematic diagrams show how the circuit functionally works to meet device specifications, whereas a board design shows how all the components are physically connected. Michael Parks, Senior Vice President of Engineering Design at Green Shoe Garage, describes it in this way: “Schematics let the designer move a circuit idea from the brain to a digital file that can be shared, edited and saved for future iterations. Schematics are crucial to understanding how a circuit will work functionally.”

Schematics allow you to answer questions like, ‘Does my microcontroller have enough pins to handle all the sensors I want for my design?’, and from a collaboration perspective, they make conveying the design to other engineers easy through the use of standard symbols to delineate different electronic components. A schematic also shows the interconnection between components in a very easy to comprehend manner. Good PCB layouts are based on good schematics, so that is where the work begins.

Designing a circuit and creating the schematic

A circuit design always starts with a specification that describes in detail what the device will do. From that specification, the engineering team will create a block diagram showing the relationship between various functions needed to fulfil operational requirements. Based on that block diagram, engineers will select specific components needed to perform those functions.

Engineers typically use an electronic design automation (EDA) tool to do this design work. EDA software has all the functionality needed to create designs, perform circuit simulations and analysis, create PCB layouts, and generate files that PCB fabricators use to manufacture boards. Creating a schematic is an iterative process that moves from block diagram to a drawing that shows more detailed component relationships, and ultimately to a detailed schematic showing pin connections based on actual component specifications.

When creating schematics, engineers have a choice of either using flat or hierarchical schematics. A flat schematic is one in which the entire design is detailed on a single sheet or multiple interconnecting sheets for large and complex designs (Figure 2). 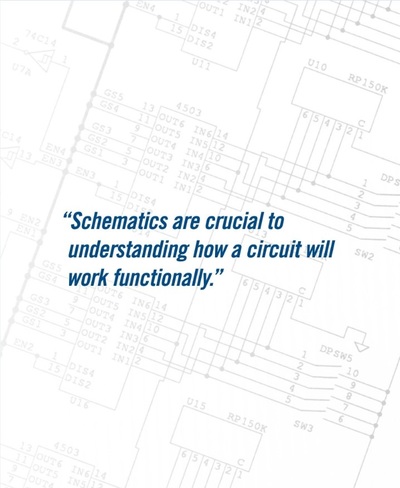 Parks noted, “If you are working on a design where multiple people are contributing, a hierarchical schematic makes it easier to work asynchronously. It allows you to abstract away the complexity of parts that you are going to treat as ‘plug and play’.”

For example, let’s say you are building a PCB that will incorporate someone else’s circuitry, but you only really care about the inputs and outputs of their part and not necessarily how the internal components are wired. In that case, a hierarchical schematic can render their part as a black box you will be incorporating into your design, but it also allows you to look at that black box circuitry in the future if you need to better understand its inner workings. It also makes updating the design much simpler should parts become obsolete in the future, or if the developer wishes to offer a family of products with slight variations. For example, an environmental monitoring platform that offers both a Wi-Fi radio option and an LTE radio option.

Once you have a completed and verified schematic, it is time to create the PCB layout.

EDA software typically contains functionality that helps you turn a schematic into a PCB layout. This includes the ability to set basic design rules, such as PCB size, trace widths, hole sizes and other design rules that help ensure you do not create a layout that is impossible to manufacture. Even when using modern EDA software, there is an art to creating PCB layouts. Though it is beyond the scope of this article, the following are helpful best practices.

The ground plane should always be continuous under RF components and transmission line traces. Include a generous amount of ground vias between layers around the RF portion of the PCB. “This helps cut down on cross-coupling between the low-speed signal lines and the RF transmission lines,” said Parks. “In other words, it reduces noise being induced on the low-speed signal lines (acting as a receiver) from the high-speed RF lines (acting as a transmitter).”

A word about auto-routing

Most EDA software has auto-routing functionality that will layout the PCB based on placed components and schematic information. Most engineers do not use auto-routing except in particular circumstances. For instance, auto-routing can save time when laying out a highly repetitive, non-critical area of a board, such as an LED display, or when trying to locate a difficult connection between two specific pins. However, using auto-routing to lay out critical areas or an entire board will result in an unusable mess. “Auto-routers don’t always make the best choices,” said Parks.

Other factors also influence PCB layout. For instance, it is becoming increasingly common to use multilayer PC boards. Parks noted several advantages. “Although putting components on one layer is ideal, a multilayer board allows you to reduce length and width when real estate is limited. You can also put different voltage components on different layers, and use layers to block cross-talk in a circuit.” However, multilayer boards tend to be more expensive, and they can create design issues. For instance, passing a trace between layers may be convenient, but it can also add latency to a circuit.

Another PCB option is the flexible printed circuit (FPC). These are smaller, lighter and more mechanically flexible than rigid PCBs. They are often used in wearable devices where human comfort is a design factor. Parks noted, “Certain types of additive FPC manufacturing can be very cost-effective and environmentally friendly as they tend not to require etching chemicals found in more traditional PCB manufacturing.”

Once you have a final PCB layout, the EDA software will generate design files that PCB fabricators can use to create the PCB. For prototyping purposes, you want to select manufacturers who can create PCBs in small batches at a reasonable price, and they can do it quickly.

Testing your circuit board

Bare PCBs should be inspected and tested before assembly. These tests include visual inspection as well as capacitance tests that look for shorts, and resistance tests that verify proper current flow through the traces (Figure 3). 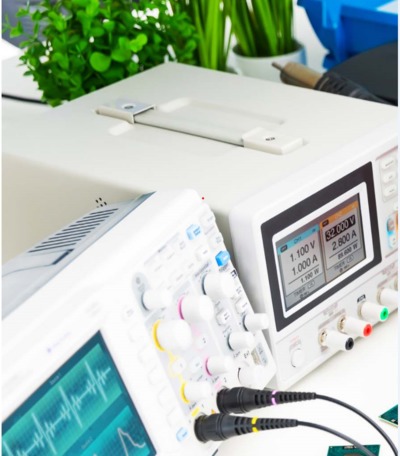 It’s important to recognise that PCB layout is often more art than science, especially if you are dealing with RF or high-speed signals. Trace lengths and topology can be culprits in whether or not a board works. Also, the manufacturing process is not perfect. Sometimes a perfect design can be foiled by a pick-and-place machine placing a surface mount diode on the board backwards. That’s why having limited test runs, building a test jig and developing a test plan are all crucial before committing to larger production runs.

Parks is a big fan of getting boards and prototypes made as quickly as possible so that problems can be found and corrected early in the process. “People are often afraid to take that first step,” he said. “PCBs have become cheap. I encourage getting their boards made and out there, and if nothing else, it’s the failures that will teach you most.” Parks speaks from experience. Some of the common and painful mistakes he has endured include the following:

Part of the PCB design process includes creating PCB fabrication drawings, bill of materials (BOM) and assembly drawings, and keeping these documents up to date with the most current prototype iteration. EDA software is able to generate all this documentation along with electronic files needed for fabrication and assembly.

Once you have a working PCA, it will go to the embedded software engineer who has been working on the code that will drive your device. It’s time to load and run software on the actual prototype hardware and test the design’s operational capabilities.

Here are some tips that can help minimise time/cost and maximise value in the process of making a...

As components get smaller, there begins a constant battle to ensure they are mounted accurately.