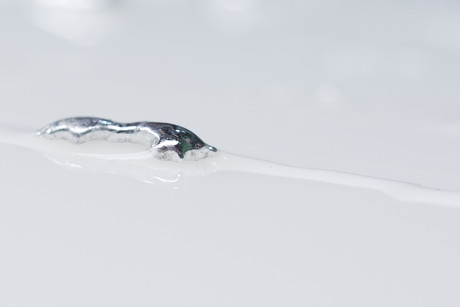 Australian researchers have used liquid metal to create two-dimensional materials no thicker than a few atoms that have never before been seen in nature. Published in the journal Science, the breakthrough is expected to revolutionise chemistry, data storage and electronics in general.

The work was led by Professor Kourosh Kalantar-zadeh and Dr Torben Daeneke from RMIT’s School of Engineering, who have been experimenting with the method for the last 18 months. Dr Daeneke explained how the idea came about, stating, “When you write with a pencil, the graphite leaves very thin flakes called graphene that can be easily extracted because they are naturally occurring layered structures. But what happens if these materials don’t exist naturally?

Seeking to create atomically thin flakes of materials that do not naturally exist as layered structures, the researchers dissolved metals in liquid metal to create very thin oxide layers, which are easily peeled away. Once extracted, these oxide layers can be used as transistor components in modern electronics.

“We use non-toxic alloys of gallium (a metal similar to aluminium) as a reaction medium,” Dr Daeneke explained. “This covers the surface of the liquid metal with atomically thin oxide layers of the added metal rather than the naturally occurring gallium oxide.

“This oxide layer can then be exfoliated by simply touching the liquid metal with a smooth surface. Larger quantities of these atomically thin layers can be produced by injecting air into the liquid metal, in a process that is similar to frothing milk when making a cappuccino.”

According to the researchers, the process is so cheap and simple that it could be done on a kitchen stove by a non-scientist. Dr Daeneke stated, “I could give these instructions to my mum, and she would be able to do this at home.” 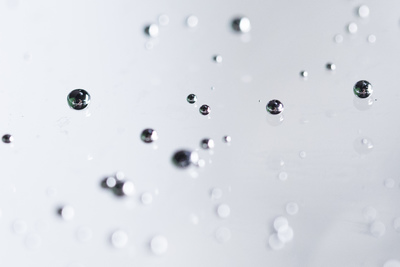 Metal droplets leave no thin layer of oxide skin on the surface, if this oxide skin is dissolved in an alkali base or acid. Image credit: RMIT University.

“We predict that the developed technology applies to approximately one-third of the periodic table,” Professor Kalantar-zadeh said. “Many of these atomically thin oxides are semiconducting or dielectric materials.

“Semiconducting and dielectric components are the foundation of today’s electronic and optical devices. Working with atomically thin components is expected to lead to better, more energy-efficient electronics. This technological capability has never been accessible before.”

The breakthrough could also be applied to catalysis, the basis of the modern chemical industry, reshaping how scientists make all chemical products including medicines, fertilisers and plastics.

Top image caption: This image of a liquid metal ‘slug’ and its clear atom-thick ‘trail’ shows the breakthrough in action. When dissolved in a liquid metal core, certain metals leave behind this clear layer of their oxide, which is no thicker than a few atoms and can be peeled away by touching or rolling. Image credit: RMIT University.