A wealth of knowledge at the World Electronics Forum 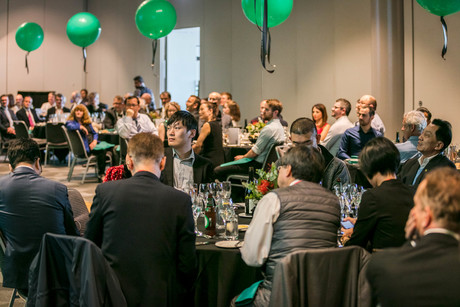 From 4–6 December, the City of Adelaide played host to the 2019 World Electronics Forum (WEF) — a voluntary gathering of CEOs and directors of electronics industry associations that has taken place every year since 1995.

Meetings of the WEF are held in a different global city each year, with the only previous Australian gathering having taken place in Canberra in 2003. It was thus a momentous occasion when the 2019 event was secured by Australian industry association EIDA (Electronics Industry Development Adelaide) — one that would see a range of local and international speakers convene at the Adelaide Convention Centre to present on the topic ‘Electronics — Enabling Our Future’.

Of course we can’t talk about electronics and the future without mentioning the Internet of Things (IoT). WEF speaker Pietro Skisa, IoT Practice Lead at Braemac, is no stranger to this topic — his company has connected over three million IoT devices in the past three years. He stressed that if you’re looking at rolling out your own IoT network, you need to consider your business case — ie, what exactly you’re trying to achieve — and then assess the various options based on their bandwidth and range.

For example, Skisa recommends a cellular network for mission-critical or outdoor applications, whereas latency-sensitive applications such as autonomous driving and remote surgery would benefit most from ultra-reliable low-latency communication (URLLC). Enhanced Mobile Broadband (eMBB) offers high bandwidth that is suitable for web browsing, video streaming and virtual reality, while massive machine-type communication (mMTC) is designed for applications such as sensing, metering and monitoring.

The complexity of your data will meanwhile play a role in determining any artificial intelligence (AI) you wish to include as part of your network, in order to utilise this data for decision-making purposes. Skisa noted that once data is collected it is sent to the cloud, and this is where the AI is typically hosted — but if your data is particularly large or complex, it will simply take too long to reach the cloud, and for the AI to make a decision. The solution is thus to bring AI to the device level via ‘edge computing’, which Skisa recommends for decisions that need to be made instantaneously and in real time.

For those seeking to collect less complex data over a larger area, Thinxtra Network, Cloud & Services Manager Adrian Tchordjallian recommends utilising low-power wide-area (LPWA) technology. Tchordjallian says LPWA solves many of the issues that can be found in some other IoT networks — including high energy consumption for devices, short range, complexity and high cost — with a range of several kilometres and power-efficient data transmission.

The reason for this efficiency, Tchordjallian explained, is that the sensors deployed in LPWA networks (LPWANs) — recording things like movement, temperature, geolocation, etc — can transmit their data in just a few bytes, which is far smaller than, say, a voice message of a few megabytes. Thinxtra’s Sigfox network, for example, enables the user to send 4200 messages per month per device, with the capacity to only ‘listen’ for data when it’s asked. Devices operating on Sigfox can also have up to 10 years of battery life, Tchordjallian noted, although this diminishes the more data that is transmitted.

Yet even the simplest data can have a significant impact, according to Tchordjallian, who noted that Thinxtra has already helped a variety of businesses with a variety of applications. For example, Thinxtra worked with a rental car operator to install GPS trackers in their vehicles, so the company could accurately track the vehicles in the event that they were stolen. Sensors have also been installed to monitor the capacity of public bins in West Melbourne, meaning sanitation workers can be more efficiently deployed to empty the bins only when they are actually full. Finally, temperature-sensitive applications have benefited from sensors installed in fridges, sending alerts in the event of a temperature rise (due to a power failure, for example) and thus giving companies the opportunity to realise the problem early and hopefully save their refrigerated stock.

According to academic Professor Göran Roos, the implementation of smart technology — through devices such as sensors — will be critical for companies looking to continue to operate in high-cost manufacturing environments, as they will need to find ways to do things better than, cheaper than or completely different to their competitors. He noted that sensors themselves can actually be very cheap — as low as 2 cents each — and that by combining them with machine learning and data analytics, companies can create profitable and useful solutions for their customers, via predictive maintenance applications for example.

Indeed, Prof Roos claims that all products must eventually become smart products — with features including monitoring, control, optimisation and autonomy — and that if your company doesn’t sell smart products, you can always sell devices that help your customers’ products become smart. The key, he said, is to provide value for money — which does not mean selling products at a low cost, but rather increasing their usefulness and relevance to the customer. “You want to produce the right thing, not a cheap thing,” Prof Roos stated, noting that a lot of businesses go under because they produce cheap products that nobody actually wants.

Companies should also remember that sensors do not always need to be sold on to the customer, and can be utilised within the manufacturing environment itself in order to optimise production. He gave the example of a manufacturer who deployed sensors along their production line, collecting data that identified potential bottleneck issues — as a result, in less than a week they went from producing 128 units per day to 580 units per day. And given that Prof Roos claims companies should be continuously focusing on reducing costs and improving productivity, sensing solutions will play a vital role in enabling this to occur.

Manufacturers should also take care to maintain strong relationships with their customers, informing them if and when any changes are made to a particular component — a component the customer may be in the market for, and may expect to always look more or less the same. This advice came from Donald Kay, CEO of Don Alan, who warned that counterfeiting and other quality issues are unfortunately rife in the electronics industry.

Of course, there are customers out there who will unknowingly purchase counterfeit components — unlikely to work as well as the real thing — from shifty suppliers. If the manufacturer is made aware of such suppliers, they may be in a position to steer customers away from them in future. However, sometimes customers may willingly turn to counterfeit products if it seems the manufacturer is unable to match their requirements. If you were the purchasing manager for your company, and it appeared one of your favourite products no longer existed, it may be tempting to buy an apparently identical product from another source — particularly if you were making this decision with a deadline looming over you. Indeed, Kay claimed that desperation is the biggest enemy of supply chain integrity, stating, “When you’re desperate, anything can happen.”

It’s clear that the technology of today has the ability to enable the applications of tomorrow — so long as we’re constantly looking to make the most of it. This is of course dependent not only on lifelong learning from current members of the STEM profession, but also the next generation. The good news is that it appears the future is in safe hands, with representatives of the award-winning Student Robotics Club of South Australia, known as the RoboRoos, making a special appearance at the forum to talk about their mission to make rock stars out of engineers. Key to this is the club’s ongoing participation in the FIRST robotics programs, designed to get kids of all ages more interested in STEM — the most challenging of which asks its teenage participants to build and program a 50 kg robot in just six weeks.

The RoboRoos were complemented at the forum by former students of STEM Fast Track, a mentoring program for young people looking to develop their STEM literacy as well as useful life skills such as teamwork and project coordination. Via its STEM Mista and STEM Sista programs (for young men and women respectively), STEM Fast Track uses a combination of workshops, presentations and networking events to give young people the confidence and know-how required to pursue a successful STEM career. The program’s CEO and founder, Teresa Janowski, probably said it best when she stated, “We assume kids, at this age, don’t want to learn this stuff. But they do. They just don’t know it.”

These are just a few highlights from what proved to be an extensive conference program — one that shone a spotlight on some of the ways electronics will continue to play a vital role in all our lives. The event proved an enlightening experience for those who attended — from veterans of the industry right down to the school-aged guest speakers — proving that when it comes to the possibilities enabled by electronics, there is always more to discover.

Archer Exploration is on a mission to create a qubit processor that operates at room temperature...

Analog Devices has seen a rise in the number of requests for technologies related to Industry...