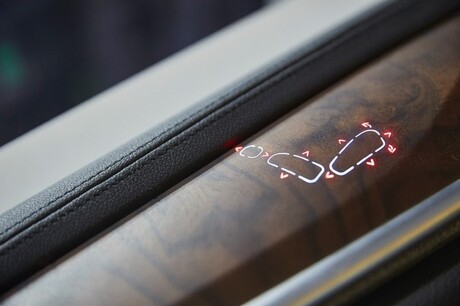 In-mould electronics (IME) is a process that combines printed electronics with 3D forming and moulding to create 3D objects with embedded electronics; these electronics can include interconnects, sensors, rigid IC or LEDs, optical waveguides and so on. In-mould electronics eliminates or shrinks the separate circuit board and structurally integrates the wiring and optical guides, saving space and enabling novel, thin and lightweight 3D-shaped designs.

The team at IDTechEx Research has been researching the market developments around in-mould electronics, with the results captured in the report ‘In-Mold Electronics 2020–2030: Technology, Market Forecasts, Players’. Forecasts suggest an inflection point around 2023 and that the market can reasonably be expected to reach $700m by 2027 from only a few million today. To get there, the market will grow in small steps, starting with small-volume items before graduating to larger-volume products with challenging reliability requirements.

This technology is not very young. It has a developing history older than nearly a decade. One reason it has taken this long to reach significant commercial success is that its production demands a steep learning curve. Many challenges are involved in taking a flat sheet, printing multiple layers on it, mounting rigid ICs, 3D forming it, and then over moulding it. Importantly, many material innovations and developments have been necessary to enable in-mould electronics.

The chart below shows how the functional film will increase its value capture as one shifts to IME. Here, the functional film is composed of the base film, the stack of printed graphical and functional inks, adhesives, pick-and-placed ICs or LEDs and so on. Clearly, much of the value on the functional film side will go to the constituent enabling materials as the other components are, more or less, standard products.

How value shifts towards the so-called functional film when IME is adopted in a touch device. Source: Faurecia @ IDTechEx Show! 2019. For a larger image, click here.

Conductive inks play a fundamental role in this technological platform. They are the embedded circuit board in an IME-made product. The conductive ink, however, must fulfil many requirements.

The inks must be IME compatible, meaning that they should survive the one-off elongation caused by the 3D forming steps. If the inks are not sufficiently stretchable, then cracks form along the tracks during the 3D forming. The higher the stretchability, the more design freedom the developers will have in creating complex 3D shapes with sharp turns. This will help differentiate one ink from another.

The inks should also exhibit high conductivity. This allows thinner lines for a given conductivity, which should help the stretchability. This will also improve the electronic function. The conductivity of IME inks has improved generation after generation, reaching a level that is commonly found in standard screen-printed PTFs or polymer thick films. Despite this progress, the conductive lines are not suited to carrying power and are restricted to signal lines.

Conductive inks often exist as part of a stack of inks including graphical and dielectric ones, and the sequence of the stack matters. Furthermore, all the materials in the stack should be optimised to work with one another and survive the temperature cycles involved in curing the ink and the adhesives and in forming and moulding. This means that selling a complete material portfolio is a good strategy because it lowers barriers to adoption, especially in the early days where standard products and procedures are missing.

Conductive inks should also be reliable. This means that they should show minimal change in behaviour during actual operation conditions or when exposed to heat or moisture. When they do show performance changes, these changes should be as predictable as possible so that they can be designed into the product function and behaviour. Indeed, the entire printed stack should be reliable during operation, especially against moisture. In fact, one of the underlying causes of the failure of the IME products deployed in a Ford car in 2012 was understood to be that moisture ingress had corrupted the behaviour. Such mistakes can no longer be tolerated, especially given that the embedded nature of the electronics gives no change to repair.

The number of IME conductive ink players has increased. Multiple suppliers have good IME conductive ink and portfolio offerings. Some have engaged with potential users early, giving them a head start. In general, like most conductive ink applications, the value capture by the ink supplier will be initially high and they will have good margins on their cost of goods. However, with time, IDTechEx expects that the market will return to standard conditions found in other mature applications. Further note that this value capture is mainly by the formulator and not the powder manufacturer. The latter does not need to meet stringent morphology or size requirements. In fact, for IME inks to work, it seems that a fairly broad particle size distribution is actually helpful.

Not just about the conductive ink

As mentioned above, conductive inks are just one material in the stack. There will be graphic or IMD (in-mould decoration) inks — some of which can be UV cured. There will barrier ink and dielectric inks. The latter helps form multilayer circuits or complex circuit patterns by allowing conducting traces to pass over one another. The dielectric layer will need to be as pinhole-free as possible even after being stretched to increase breakdown voltage.

The adhesive should also show some stretchability. This would enable the ICs or the connectors to be mounded at or near locations that have some curvature. Without this built-in flexibility, the adhesive can peel off, causing a disconnect. Therefore, the development of IME compatible adhesives is needed to enhance reliability and to widen design possibilities by allowing more freedom in the placement of the rigid parts.

Going from PC to PET

The general substrate material is polycarbonate (PC). This is a very formable material; it is, however, not the lowest cost. An emerging trend is to use PET or heat-stabilised PET, which will certainly have cost benefits. This transition, however, is usually fraught with challenges; one challenge is that it is not as formable. Therefore, it will be used in designs where the radius of the curve does not need to be high. This will probably cover most current designs.

Another challenge is that even heat-stabilised PET will impose a temperature ceiling. One consequence of this is that one cannot use solder to do the standard part attach. One could use conductive adhesives, but this often limits the type of IC that can be used to those with few I/O pins (in other words, to simple ICs). An interesting innovation here is the development of ultralow temperature solder, claimed to be compatible with PET. This opens the door to integrating complex high I/O ICs on PET for IME devices that do not have sharp curvatures.

Expanding the material and functionality menu

The functional material menu for IME should expand in time. The image below shows various transparent conductive film technologies (PEDOT and CNTs) that have been 3D formed. This enables the creation, for example, of a 3D touch surface in the IME-made part. 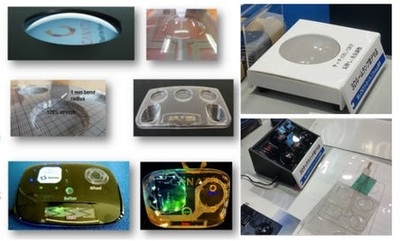 Images show that PEDOT and CNTs can be thermoformed to give transparent conductivity.

To learn more about this technology, key challenges and innovation opportunities, all the key players across the value chain, the latest prototype and products, as well as existing and future market forecasts, visit www.IDTechEx.com/IME.

How facial recognition technology benefits and harms us

Ever since the growth of facial recognition technology (FRT), the world's been cautiously...

Suppliers are required by law to demonstrate that their wireless device complies with ACMA's...