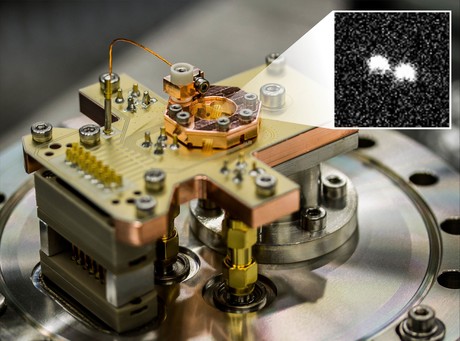 German researchers have developed a new approach for controlling qubits via microwave pulses, which is said to reduce error rates and increase efficiency.

A functional quantum computer is one of the most intriguing promises of quantum technology. With significantly increased computing power, quantum computers will be able to solve tasks that conventional computers cannot handle, such as understanding and inventing new materials or pharmaceuticals as well as testing the limits of cryptographic techniques.

Presently, the most advanced approaches for realising qubits — basics units of quantum information — are superconducting circuits and trapped ions; the former stores quantum information in electronic components, the latter in different energy levels of single atoms. By using superconducting circuits, researchers recently succeeded in demonstrating that quantum computers are able to perform highly specialised tasks that conventional computers cannot handle. However, in contrast to any other approach, ions produce significantly lower error rates in operations.

In order to reduce error rates even further and provide reliable operations much faster, researchers at Leibniz University Hannover and Physikalisch-Technische Bundesanstalt (PTB) have now developed a new method. Their findings have been published in the journal Physical Review Letters.

As part of the method, ions are trapped under vacuum by using electric fields above a chip structure. Qubit operations are implemented by sending microwave signals through special conductor loops embedded in the chip structure. Usually, logic operations are carried out via extremely carefully controlled laser beams. Using microwave fields has the advantage that they are both relatively easy to control and a highly mature technology since they are omnipresent in numerous products from planes to mobile phones.

The researchers investigated the most efficient methods for operations on qubits. This is also a highly relevant issue in conventional computer chips, as the amount of energy necessary per operation determines how many of them can be processed per second before the chip starts to overheat.

Regarding ion-trap microwave quantum computers, the researchers succeeded in demonstrating that specifically shaped microwave pulses, where the field is turned on and off smoothly, produce error rates 100 times lower than those where the fields are simply switched on and off — with the same energy input and despite the presence of noise. For this purpose, the team introduced additional and carefully controlled noise into the experiment and determined operation errors for varying levels of injected noise as well as for both pulse shapes.

“This made a huge difference for our experiment,” said study co-author Giorgio Zarantonello, from Leibniz University Hannover and PTB. “In the past, finding suitable operations involved much trial and error as well as a long optimisation process before catching a moment with very little noise. All we have to do now is to switch on the experiment and it works.”

After demonstrating that basic operations with low error rates are feasible, the researchers now aim to transfer their findings to tasks that are more complex. The intention is to achieve less than one error in every 10,000 operations, which is when scaling to a large number of qubits becomes efficient. For this task, they have already developed a patented microfabrication technology that supports the storage and manipulation of a large number of qubits in a chip structure.

Image caption: Interior of the apparatus in which the ions are trapped. The close-up shows an image of two single 9Be+ ions used for the quantum logic gates. Image ©T Dubielzig, H Hahn (LUH/PTB).