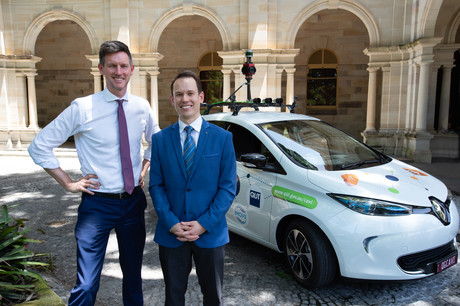 An engineer at the cutting edge of the development of autonomous vehicles and robotics has been recognised at a gala awards ceremony in Sydney, organised by the Australian Academy of Technology and Engineering.

Michael Milford, a professor in electrical engineering at the Queensland University of Technology (QUT), was presented with the prestigious Batterham Medal for his interdisciplinary research at the boundary between robotics, neuroscience and computer vision at the Australian Centre for Robotic Vision. Presented annually to a graduate engineer who has achieved substantial recognition for their work in the past five years, the medal was named in honour of Professor Robin Batterham — a renowned chemical engineer and former president of Australian Academy of Technology and Engineering.

Prof Milford’s research looks at how the brain handles navigation and perception to see how they can be applied to challenging tasks such as all-weather, anytime positioning for autonomous vehicles. His latest project involves the Queensland Department of Transport and Main Roads and the iMOVE Cooperative Research Centre, taking an artificial intelligence system on a 1200 km road trip of south-east Queensland.

“The big problem that faces autonomous vehicles right now is that at the moment they don’t drive as well as humans in all possible conditions,” Prof Milford said.

“We’re targeting how the car might use infrastructure, such as lane markings and street signage, to help it to drive well.”

Prof Milford and his group have collaborated with industry and universities around the world, including Harvard and Oxford universities, DeepMind, the US Air Force and NASA’s Jet Propulsion Laboratory, among others. He is currently also leading research on new positioning systems for autonomous mining vehicles, working with Fortune 100 company Caterpillar, Mining3 and the Queensland Government.

Prof Milford said he was honoured to receive the Batterham Medal and that his team’s work had been recognised by the academy. Academy President Professor Hugh Bradlow congratulated Prof Milford, saying he has made “a tremendous contribution — translating abstract neuroscience concepts into rugged technology that can be trialled for real-world applications”.

Webinar: How eSIM is forging a new future in IoT

Digi-Key Electronics has announced that it is sponsoring a product training webinar with...

STMicroelectronics has announced the acquisition and integration of the assets of SOMOS...

It's played a key role in helping businesses to open up safely during COVID-19, and now the...

ABB to help convert waste into sustainable energy in WA