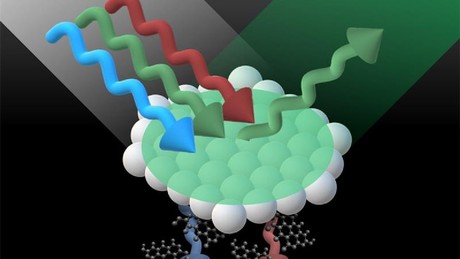 An international team of scientists, led by the Universities of Surrey and Sussex, has developed colour-changing, flexible photonic crystals that could be used to develop sensors that warn when an earthquake might strike next.

These wearable, robust and low-cost sensors can respond sensitively to light, temperature, strain or other physical and chemical stimuli, making them a promising option for cost-effective smart visual sensing applications in a range of sectors including health care and food safety.

Writing in the journal Advanced Functional Materials, the researchers outlined their method to produce photonic crystals containing a minuscule amount of graphene, resulting in a wide range of desirable qualities with outputs directly observable by the naked eye. Intensely green under natural light, the versatile sensors change colour to blue when stretched or turn transparent after being heated.

“Our research here has taken inspiration from the amazing biomimicry abilities in butterfly wings, peacock feathers and beetle shells where the colour comes from structure and not from pigments,” said Alan Dalton, Professor of Experimental Physics at the University of Sussex. “Whereas nature has developed these materials over millions of years, we are slowly catching up in a much shorter period.”

“This work provides the first experimental demonstration of mechanically robust yet soft, freestanding and flexible, polymer-based opals containing solution-exfoliated pristine graphene,” added Dr Izabela Jurewicz, a Lecturer in Soft Matter Physics at the University of Surrey. “While these crystals are beautiful to look at, we’re also very excited about the huge impact they could make to people’s lives.”

The sensors have many potential applications, functioning for example as time-temperature indicators (TTI) for intelligent packaging. The sensors are able to give a visual indication if perishables, such as food or pharmaceuticals, have experienced undesirable time-temperature histories, as the crystals are extremely sensitive to even a small rise in temperature between 20 and 100°C.

Their pressure-responsive shape-memory characteristics are meanwhile attractive for biometric and anti-counterfeiting applications. Pressing the crystals with a bare finger can reveal fingerprints with high precision, showing well-defined ridges from the skin.

The photonic crystals can also be used as tissue scaffolds for understanding human biology and disease. If functionalised with biomolecules, they could act as highly sensitive point-of-care testing devices for respiratory viruses, offering inexpensive, user-friendly biosensing systems.

Finally, the sensors’ mechanochromic response allows for their application as body sensors that could help improve technique in sports players. They could also be used in a wrist band that changes colour to indicate to patients if a healthcare practitioner has washed their hands before entering an examination room.

“Polymer particles are used to manufacture everyday objects such as inks and paints,” said Joseph Keddie, Professor of Soft Matter Physics at the University of Surrey. “In this research, we were able to finely distribute graphene at distances comparable to the wavelengths of visible light and showed how adding tiny amounts of the two-dimensional wonder-material leads to emerging new capabilities.”

Both universities are now working with Sussex-based company Advanced Material Development (AMD) to commercialise the technology, with AMD CEO John Lee saying their method “represents a simple, inexpensive and scalable approach to produce multifunctional graphene-infused synthetic opals and opens up exciting applications for novel nanomaterial-based photonics. We are very excited to be able to bring it to market in the near future.”

Emitting light from silicon has been the 'Holy Grail' of the microelectronics industry...