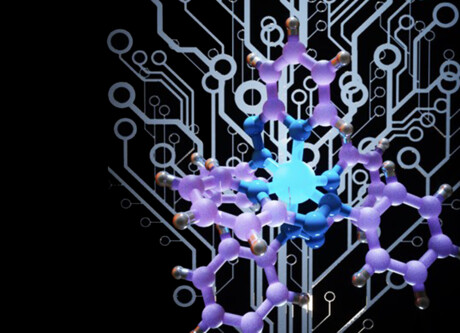 Many electronic devices today are dependent on semiconductor logic circuits based on switches hard-wired to perform predefined logic functions. An international team of researchers have now developed a novel molecular memristor, or an electronic memory device, that has exceptional memory reconfigurability. It has been described in the journal Nature.

Unlike hard-wired standard circuits, the molecular device can be reconfigured using voltage to embed different computational tasks. The energy-efficient new technology, which is capable of enhanced computational power and speed, can potentially be used in edge computing, as well as handheld devices and applications with limited power resource.

“This work is a significant breakthrough in our quest to design low-energy computing,” said Associate Professor Ariando from the National University of Singapore (NUS), who led the research. “The idea of using multiple switching in a single element draws inspiration from how the brain works and fundamentally reimagines the design strategy of a logic circuit.”

Research team member Dr Sreebrata Goswami, a Senior Research Scientist at NUS and previously Professor at the Indian Association for the Cultivation of Science, conceptualised and designed a molecular system belonging to the chemical family of phenyl azo pyridines that have a central metal atom bound to organic molecules called ligands. He explained, “These molecules are like electron sponges that can offer as many as six electron transfers resulting in five different molecular states. The interconnectivity between these states is the key behind the device’s reconfigurability.”

Dr Goswami created a tiny electrical circuit consisting of a 40-nm layer of molecular film sandwiched between a top layer of gold, and a bottom layer of gold-infused nanodisc and indium tin oxide. He observed an unprecedented current-voltage profile upon applying a negative voltage to the device.

Unlike conventional metal-oxide memristors that are switched on and off at only one fixed voltage, these organic molecular devices could switch between on-off states at several discrete sequential voltages. Using an imaging technique called Raman spectroscopy, spectral signatures in the vibrational motion of the organic molecule were observed to explain the multiple transitions.

“Sweeping the negative voltage triggered the ligands on the molecule to undergo … electron-gaining, which caused the molecule to transition between off and on states,” Dr Goswami said. The researchers described the behaviour of the molecules using a decision tree algorithm with ‘if-then-else’ statements, which is used in the coding of several computer programs, particularly digital games, as compared to the conventional approach of using basic physics-based equations.

Building on their research, the team used the molecular memory devices to run programs for different real-world computational tasks. As a proof of concept, the team demonstrated that their technology could perform complex computations in a single step, and could be reprogrammed to perform another task in the next instant. An individual molecular memory device could perform the same computational functions as thousands of transistors, making the technology a more powerful and energy-efficient memory option.

“This new discovery can contribute to developments in edge computing as a sophisticated in-memory computing approach to overcome the von Neumann bottleneck, a delay in computational processing seen in many digital technologies due to the physical separation of memory storage from a device’s processor,” said Assoc Prof Ariando. The new molecular device also has the potential to contribute to designing next-generation processing chips with enhanced computational power and speed.

“Similar to the flexibility and adaptability of connections in the human brain, our memory device can be reconfigured on the fly for different computational tasks by simply changing applied voltages,” added first author Dr Sreetosh Goswami, from NUS. “Furthermore, like how nerve cells can store memories, the same device can also retain information for future retrieval and processing.”

The researchers are now in the midst of building new electronic devices incorporating their innovation, and working with collaborators to conduct simulation and benchmarking relating to existing technologies. According to Assoc Prof Ariando, “The technology might first be used in handheld devices, like cell phones and sensors, and other applications where power is limited.”

Skin electronics require stretchable conductors that satisfy a range of characteristics, but it...

Switching without touching means not contaminating the surface with potentially harmful germs,...