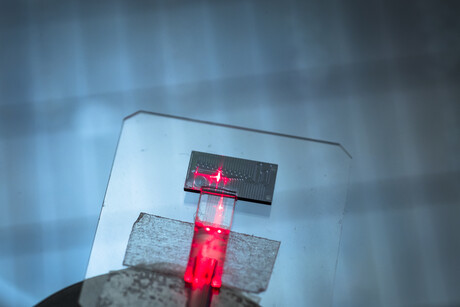 An international research team claims to have broken the spectral efficiency world record for optical data transmission with a single integrated photonic chip, with a transmission speed capable of downloading 1000 high-definition movies in less than a second.

At the core of the technological breakthrough is a novel chip developed by Dr Chu Sai-tak, an expert in integrated optical circuits and components from City University of Hong Kong (CityU). He collaborated on the project with researchers from Hong Kong, China, Canada and Australia, with the results published in the journal Nature Communications.

Dr Chu explained that the key component inside the chip is a micro-ring resonator, which can generate an optical frequency response called a ‘micro-comb’. A single micro-comb could replace dozens of parallel laser sources with different wavelengths. In other words, with the micro-ring resonator in it, an integrated photonic chip can already provide enough signal carriers for ultrahigh-speed optical data transmission.

What makes this chip special is that it can generate a special class of micro-comb called a ‘soliton crystal’. Dr Chu explained that a ‘soliton’ is a solitary wave that behaves like a particle and can be transmitted in optical fibres while maintaining its shape, amplitude and speed for a long time even after it interacts with another soliton. Soliton signals generated by the micro-ring resonators are highly stable, which is crucial for long-distance and high-speed optical signal transmission. “The word ‘crystal’ in the name refers to the crystal-like shape of the optical frequency mode generated,” he added. 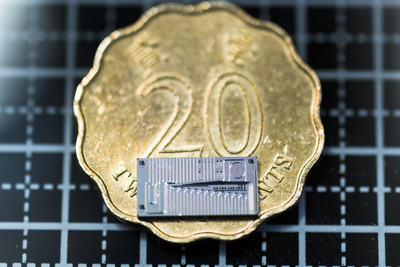 The chip is only 5 x 9 mm in size — even smaller than a Hong Kong 20 cent coin. Image credit: City University of Hong Kong.

Fabricated chips were screened and tested in CityU’s laboratory to ensure that soliton crystals could be generated. Only tested chips would be sent to the collaborators for installation in optical devices as a laser source for the high-speed optical data transmission experiment. Current technology means that each laser source could only emit a single transmission signal of a specific wavelength; therefore, 80 parallel laser sources are required to generate 80 laser beams with different wavelengths.

“But using our integrated chip, only one laser source is required,” Dr Chu said. “When the laser passes through the chip that consists of a micro-ring resonator, followed with some adjustment, soliton crystals will be generated after adjustment. As a result, 80 different wavelengths will be generated. And the pulses of soliton crystals are very stable, suitable for long-distance optical data transmission.”

The research team conducted the data transmission trials not just in a laboratory, but also in a field trial over a 75 km singlemode fibre network connecting Melbourne’s RMIT and Monash Universities. Experiment results were said to achieve a new world record of spectral efficiency (the rate at which information can be transmitted per second over a given bandwidth), which was 3.7 times higher than existing records held by similar technologies with a single chip source. Spectral efficiency only dropped a little after 75 km of signal transmission, indicating that signal transmission was stable.

The team’s technology achieved an outstanding speed of 44.2 Tbps (equivalent to 5525 GBps), about a 50% increase compared to the existing record. Internet speed as fast as 44.2 Tbps means downloading 1000 high-definition movies in less than a second is possible.

“The C-band fibre we used for the field trial is commonly used in the market,” Dr Chu noted. “If optical fibres of wider bandwidths were used, we believe the data transmission speed would be even faster, probably two to three times faster.”

The technology can also be applied to multicore fibres, which consist of many optical fibres to provide multiple transmission pathways and could enhance the speed of data transmission even further. In addition to optical-fibre telecommunications, micro-comb technology could also be applied to fields such as spectroscopy, metrology, sensors and measurement in quantum mechanics.

A new design for light-emitting diodes (LEDs) may hold the key to overcoming a longstanding...