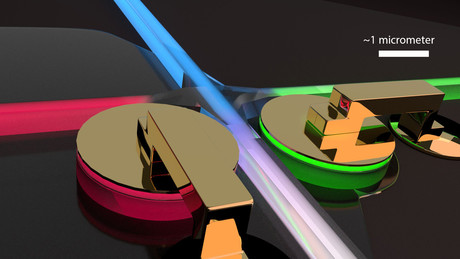 Researchers at the US National Institute of Standards and Technology (NIST) and ETH Zurich have collaborated on an optical switch that routes light from one computer chip to another in just 20 billionths of a second — said to be faster than any other similar device.

Described in the journal Science, the compact switch is claimed to be the first to operate at voltages low enough to be integrated onto low-cost silicon chips, and redirects light with very low signal loss. Its record-breaking performance also marks a major new step towards building a computer that uses light instead of electricity to process information.

Relying on particles of light — photons — to transport data within a computer offers several advantages over electronic communications. Photons travel faster than electrons and don’t waste energy by heating up the computer components. Managing that waste heat is a major barrier to improving computer performance. Light signals have been used for decades to transmit information over great distances using optical fibres, but the fibres take up too much room to be used to carry data across a computer chip.

Now, the researchers have created a switch that exploits the wave nature of light. When two identical light waves meet, they can superpose such that the crest of one wave aligns or reinforces the crest of the other, creating a bright pattern known as constructive interference. The two waves may also be exactly out of step, so that the valley of one wave cancels the crest of the other, resulting in a dark pattern — destructive interference.

In the team’s set-up, a light beam is confined to travel inside a miniature highway — a tube-shaped channel known as a waveguide. This linear highway is designed so that it has an off-ramp — some of the light can exit into a racetrack-shaped cavity, just a few nanometres away, etched into a silicon disk. If the light has just the right wavelength, it can whip around the racetrack many times before leaving the silicon cavity.

The switch has one other crucial component: a thin gold membrane suspended just a few tens of nanometres above the silicon disk. Some of the light traveling in the silicon racetrack leaks out and strikes the membrane, inducing groups of electrons on the membrane’s surface to oscillate. These oscillations, known as plasmons, are a kind of hybrid between a light wave and an electron wave: the oscillating electrons resemble the incoming light wave in that they vibrate at the same frequency, but they have a much shorter wavelength. The shorter wavelength lets researchers manipulate the plasmons over nanoscale distances, much shorter than the length of the original light wave, before converting the oscillations back into light. This, in turn, allows the optical switch to remain extremely compact.

By changing the width of the gap between the silicon disk and the gold membrane by only a few nanometres, the researchers could delay or advance the phase of the hybrid light wave — the point in time when the wave reaches a crest or valley. Even minuscule variations in the width of the gap, which the team accomplished by electrostatically bending the gold membrane, dramatically altered the phase.

Depending on how much the team had advanced or delayed the phase of the wave, when it recombined with light still travelling in the tube-shaped highway, the two beams interfered either constructively or destructively. If the light beams match up to interfere constructively, the light will continue in its original direction, travelling down the tube. But if the light beams interfere destructively, cancelling each other out, that pathway is blocked. Instead, the light must move in another direction, determined by the orientation of other waveguides, or routes, placed close to the blocked pathway. In this way, the light can be switched at will to any of hundreds of other computer chips.

The study authors say their work may come as a surprise to many in the scientific community because the results contradict long-held beliefs. Some researchers have thought that opto-electro-mechanical switches would not be practical because they would be bulky, operate too slowly and require voltages too high for the components of a computer chip to tolerate.

Scientists had also once thought that a plasmonic system would greatly attenuate light signals because photons would penetrate the interior of the gold membrane, where electrons would absorb much of the light energy — but the researchers have now proved that assumption wrong. The compactness of the device and a design that ensured that few photons would penetrate the membrane resulted in a loss of just 2.5% of the light signal, compared with 60% with previous switches. That puts the switch, although still a prototype, within reach of commercial applications.

For example, in driverless cars, the switch could rapidly redirect a single light beam that must continually scan all parts of the roadway to measure the distance to other automobiles and pedestrians. The device could also make it easier to use more powerful light-based circuits instead of electricity-based ones in neural networks. These are artificial intelligence systems that simulate how neurons in the human brain make decisions about such complex tasks as pattern recognition and risk management.

The new technology also uses very little energy to redirect light signals, which may help realise the dream of quantum computing. A quantum computer processes data stored in the subtle interrelations between specially prepared pairs of subatomic particles. However, these relationships are extremely fragile, requiring that a computer operate at ultralow temperatures and low power so that the particle pairs are disturbed as little as possible. Because the new optical switch requires little energy — unlike previous optical switches — it could become an integral part of a quantum computer.

The team is now working to make the device even smaller by shortening the distance between the silicon disk and the gold membrane. This would further reduce signal loss, making the technology even more appealing to industry.

Image caption: Artist’s depiction of newly demonstrated nano-opto-electro-mechanical switches as they could be used for future filtering of colours for sensing or communications. In communications, the amount of transmitted information per channel can be increased by carrying data not only by one colour but by multiple colours. Yet, the different colour channels need to be routed on demand to different end users. The image shows how this can be achieved on the scale 1 µm by using the switches. White light can contain, for example, blue light for voice messages, red for video and green for text. All of those are filtered by the switches such that red, blue and green colour channels are routed to different designated end users. By applying tiny voltages researchers can swap colours on demand, controlling which data reaches which end user. Image credit: C Haffner/NIST.