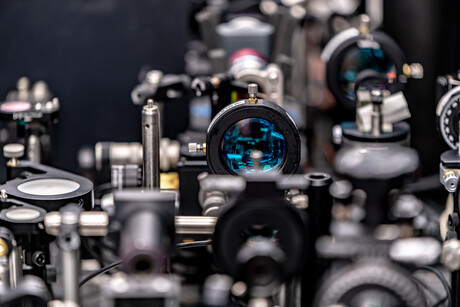 An international research team led by Russia’s Skolkovo Institute of Science and Technology (Skoltech) and IBM has created an extremely energy-efficient optical switch that could replace electronic transistors in a new generation of computers, manipulating photons rather than electrons.

In addition to direct power saving, the switch requires no cooling and is very fast: at 1 trillion operations per second, it is between 100 and 1000 times faster than today’s top-notch commercial transistors. The switch could also act as a component that links devices by shuttling data between them in the form of optical signals, as well as an amplifier by boosting the intensity of an incoming laser beam by a factor of up to 23,000. It has been described in the journal Nature.

Since a photon is the smallest particle of light that exists in nature, there is really not much room for improvement beyond that as far as power consumption goes. Most modern electrical transistors take tens of times more energy to switch, and the ones that use single electrons to achieve comparable efficiencies are far slower. Power-saving electronic transistors also tend to require bulky cooling equipment, which in turn consumes power and factors into the operating costs. The new switch conveniently works at room temperature and therefore circumvents all these problems.

The device relies on two lasers to set its state to ‘0’ or ‘1’ and to switch between them. A very weak control laser beam is used to turn another, brighter laser beam on or off. It only takes a few photons in the control beam, hence the device’s high efficiency.

The switching occurs inside a microcavity — a 35 nm-thin organic semiconducting polymer sandwiched between highly reflective inorganic structures. The microcavity is built in such a way as to keep incoming light trapped inside for as long as possible to favour its coupling with the cavity’s material. This light-matter coupling forms the basis of the new device.

When photons couple strongly to bound electron-hole pairs — aka excitons — in the cavity’s material, this gives rise to short-lived entities called exciton-polaritons, which are a kind of quasiparticle at the heart of the switch’s operation. When the pump laser — the brighter one of the two — shines on the switch, this creates thousands of identical quasiparticles in the same location, forming so-called Bose-Einstein condensate, which encodes the ‘0’ and ‘1’ logic states of the device.

The researchers used several tweaks to ensure low power consumption. First, efficient switching was aided by the vibrations of the semiconducting polymer’s molecules. The trick was to match the energy gap between the pumped states and the condensate state to the energy of one particular molecular vibration in the polymer. Second, the team managed to find the optimal wavelength to tune their laser to and implemented a new measurement scheme enabling single-shot condensate detection. Third, the control laser seeding the condensate and its detection scheme were matched in a way that suppressed the noise from the device’s ‘background’ emission. These measures maximised the signal-to-noise level of the device and prevented an excess of energy from being absorbed by the microcavity, which would only serve to heat it up through molecular vibrations.

“What makes the new device so energy-efficient is that it only takes a few photons to switch,” said Dr Anton Zasedatelev, first author of the study.

“In fact, in our Skoltech labs we achieved switching with just one photon at room temperature,” added Professor Pavlos Lagoudakis, who heads the Hybrid Photonics Labs at Skoltech.

The team commented, “There’s still some work ahead of us to lower the overall power consumption of our device, which is currently dominated by the pump laser that keeps the switch on. A route toward that goal could be perovskite supercrystal materials like those we’re exploring with collaborators. They have proven excellent candidates given their strong light-matter coupling, which in turn leads to a powerful collective quantum response in the form of superfluorescence.”

In the larger scheme of things, the researchers see their new switch as but one in the growing toolkit of all-optical components they have been assembling over the past few years. Among other things, it includes a low-loss silicon waveguide for shuttling the optical signals back and forth between transistors. The development of these components takes us ever closer to optical computers that would manipulate photons instead of electrons, resulting in vastly superior performance and lower power consumption.