Performance up, power consumption down 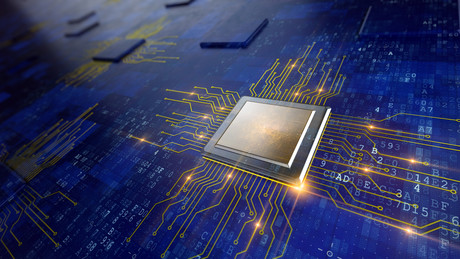 High-end applications can never have too much computing power, but thermal budgets are limited. With its six cores, the 8th generation of the Intel Core and Intel Xeon processors offers more performance with lower overall power consumption — ideal conditions for high-performance systems in harsh industrial environments. The processor generation makes its debut on COM Express modules.

Until multicore technology came along, performance increases were mostly achieved by speeding up the clock frequency. Today, the performance per clock rate tends to increase with the number of cores per processor, so more tasks can be performed in parallel. The 8th generation of the Intel Xeon and Intel Core Embedded processors has been modified on both counts: for the first time, a general-purpose embedded computer is powered by a six-core processor, and for the first time it can process 12 threads with up to 4.4 GHz. The larger number of cores and the higher clock frequency drives up total computing power significantly, which benefits applications such as vision control and monitoring of complex CNC machines, as well as control room and monitoring systems for smart factories with support for up to three independent displays in 4k.

In the automation industry, this performance increase also benefits systems that have to process and coordinate many different tasks in parallel. Examples can be found in controls for robotics, manufacturing cells, and complex packaging and machine tools. Multicore technology makes it possible to operate individual processes, such as HMI and (real-time) control, on an embedded hardware platform. This reduces the number of computer systems in a single machine, lowering costs and increasing reliability. An example from the motion control area is motion axes that are assigned to individual processor cores. In such installations, the data exchange that’s necessary to coordinate the motion sequences takes place in the system itself, which is much more efficient than connecting separate drive controls — especially since latencies occur even in connected systems, which can reduce the precision of a machine.

Collaborative robotics is a new and immensely booming market for high-performance multicore systems. According to MarketsandMarkets, it is expected to grow by 56.94% between 2017 and 2023 to reach a total global volume of US$4.28 trillion. Collaborative robots call for even more computing capacity as they require additional subsystems for situational awareness and adaptive control besides the actual controller. These can be systems such as LIDAR and (stereoscopic) obstacle detection cameras, or subsystems for adaptive control and route finding in mobile solutions. These systems require additional computing instances that can be implemented very efficiently into the control systems with more computing cores.

Automation OEMs also want more computing cores for IoT and Industry 4.0 integration as well as condition monitoring of their machines and systems. At this point, virtualisation starts to make sense in order to separate the individual tasks from each other. Depending on the software, the real-time controls of individual components can still be executed as multithreaded software on a single operating system instance; however, the gateway functionality should be separated from the real-time controls. Similarly, smart condition monitoring can be integrated efficiently by using local rule engines to evaluate and monitor the state of the mechanical components, for example, via vibration analysis. This sometimes requires significant computing power. High-end embedded systems for machine control literally cannot have too many computing cores and processing power per core. But what are the exact increases in processor performance?

First tests by congatec show that the new six-core processors offer between 45 and 50% more multithread and 15 to 25% more single-thread performance compared to 7th generation Intel Core processor variants. At a given TPD, system designers can now achieve higher bandwidth with lower overall power consumption. This allows them to install high-end computing power and features even deeper in the field and to significantly increase the functionality of their applications. Incidentally, the microarchitecture of the 8th generation processors remains unchanged from the 7th generation, but the 14 nm manufacturing technology was optimised again, resulting in lower leakage currents, which in turn allows higher clock rates. In all other respects, the processor core is almost identical, so there is no need for any customisation on the software side, allowing truly seamless migration to this latest processor generation.

If OEMs have designed their systems using computer-on-modules, they can integrate the new processor technology very quickly because all that’s needed to upgrade to the next performance levels at a given TDP is a simple module swap. The COM Express Type 6 specification ensures that modules offer identical form factors, functions and cooling solutions as ready-to-buy super components that include a complete BSP with all required standard drivers. Comprehensive specifications for the construction of a carrier board also make it easier for developers of industrial-grade computers to design a system solution that’s specifically tailored to their own requirements. Compared to full-custom designs, developers can expect to save around 50 to 90% of the effort required to develop a suitable solution at the board level. So, whenever standard motherboards do not meet the requirements of the specifications or if they are too large, computer-on-modules should be used — mass production excluded, of course.

In this context, OEMs should also look out for support by real-time hypervisors for OEMs, which are often used in the industrial control and medical sector. This offers many advantages for OEMs wanting to supplement their real-time control with additional virtual machines for IoT or Industry 4.0 connection. That’s because the two extra processor cores in addition to the previously available quad-core solutions are literally predestined for supplementary functions.

Another focus for IoT designs is support for the development of SGET’s Universal IoT Connector (UIC), which serves to standardise the decision-making and communication logic at the edge of the IoT. Next to pure hardware with comprehensive BSPs, embedded vendors that offer support for the UIC provide a large range of key standardised software modules that OEMs can use as application-ready glue logic for their applications. Available for purchase off-the-shelf, they have the advantage of significant engineering cost savings. As they rely on standards, OEMs also gain greater independence from the solutions of individual providers.

*Zeljko Loncaric is a Marketing Engineer at congatec.

The touch-responsive technology is 100 times thinner than existing touchscreen materials and so...