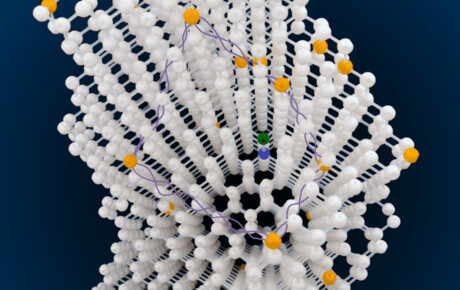 Future large-scale quantum computers must be fault tolerant, so that reliable computations can be performed with noisy components.

Now researchers from QuTech, in collaboration with Fujitsu and Element Six, have demonstrated the fault-tolerant operation of a quantum bit using a quantum processor based on spin qubits in diamond. Their results, published in the journal Nature, open the door to experimentally exploring the concepts of fault-tolerant quantum computation.

Quantum computers are anticipated to be able to solve important problems that are beyond the capabilities of classical computers. To realise useful computations, billions of operations will need to be performed on the quantum bits that make up the computer. However, the basic components of a quantum computer are inevitably imperfect. So how can we ensure that such a complex system can perform computations faithfully, without error?

The solution, as originally proposed in the 90s, is to encode quantum information in ‘logical’ qubits that are spread out over many ‘physical’ qubits. This redundancy enables one to detect and correct errors, thus protecting the encoded information. A key challenge is to ensure that all operations are fault tolerant. This means that errors on a single or a few operations — for example, any one of the physical qubits inadvertently flipping its state — should not corrupt the information encoded in the logical qubits. Such fault tolerance enables reliable computation with noisy components and is the key to realising quantum computers.

The researchers at QuTech — a collaboration between the Delft University of Technology and the Netherlands Organisation for Applied Scientific Research — have now realised such a logical qubit using their 29-qubit quantum processor. Their qubits consist of electron and nuclear spins associated with a nitrogen-vacancy centre in diamond. These spin qubits can operate at relatively high temperatures up to 10 Kelvin and, by using ultrapure diamonds grown by Element Six, the team has previously shown that they can store quantum states coherently for minutes.

“We used five nuclear-spin qubits to encode one logical qubit and used two additional qubits to perform the measurements that identify errors,” said Mohamed Abobeih, lead author on the study. A recent theoretical advance by researchers from the University of Southern California has shown that such a 7-qubit system is the smallest possible configuration that allows for fault-tolerant error correction.

The team showed that this logical qubit could be operated fault tolerantly. “First,” said co-author Yang Wang, “to encode the logical qubit, we had to invent a new encoding scheme that is optimised for our processor.” After that the team could show that the encoding, various basic qubit operations and the measurements used to identify errors could all be performed fault tolerantly.

“Crucially, a single fault anywhere in the system does not lead to the corruption of the logical qubit information,” Abobeih said. 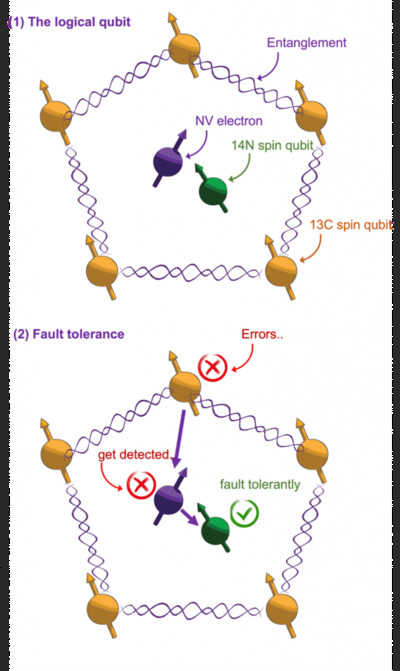 A logical qubit of information is encoded over an entangled state of five 13C nuclear-spin qubits (orange). The electron spin of NV centre is used as an extra helper qubit (purple) to perform measurements that detect errors. However, errors can also occur on this helper qubit and these can be harmful. To make the process fault tolerant, an additional helper qubit is used (14N nuclear spin, green) to identify such errors. Image credit: Taminiau lab at QuTech.

An important challenge that the team addressed was to process the information about errors in real time. As explained by project supervisor Tim Taminiau, “Because of the long coherence times of our qubits we could process the outcomes of the measurements ‘on the fly’, while the processor was running. Very few systems around the world currently have this essential capability”.

More advances are needed on the path towards useful quantum computation. Barbara Terhal, who co-supervised the research, said, “While this is an exciting step forward, especially for solid-state spin qubits, there is still a long way to go for large-scale fault-tolerant computation. Truly suppressing errors will require further improvements in the number of qubits and the quality of operations.”

With this demonstration, the quantum processors at QuTech have entered a new territory. Taminiau said, “It is exciting to see that we can now operate fault tolerantly on logical qubits. Until now, we were limited to operating on physical qubits, for which a single error can mean your entire computation has failed. It now becomes possible to experimentally investigate the concepts of fault tolerance.”

To realise larger quantum processors, the researchers aim to take a modular approach. Small processors — similar to the one demonstrated in this work — can be linked together into a single larger processor through optical quantum interconnects.

“Such optical connections have been pioneered by Ronald Hanson, also at QuTech,” Taminiau said. “Making many copies of small processors, and connecting them together into one large quantum computer, is a flexible way to address the challenge of scaling up the number of qubits.”

Realising such modular quantum processors is the focus of a larger research effort at QuTech and of its collaboration with Fujitsu. The team takes a full stack approach, in which not only improved quantum bits are studied, but also the required classical control electronics, scalable fabrication methods and new types of quantum computer architectures.

“Making the next big step will require bringing together scientists, engineers and industry,” Taminiau said.

Top image caption: Model of the quantum processor used in the research. The qubits are formed by the nitrogen-vacancy centre (green and blue), and 13C nuclear spins (orange). By spreading out a single qubit of information over five entangled spin qubits (purple connections), a logical qubit of information is formed that can be operated fault tolerantly. Image credit: Taminiau lab at QuTech.

Found: the speed limit of optoelectronics

Semiconductor electronics is getting faster and faster — but at some point, physics no...