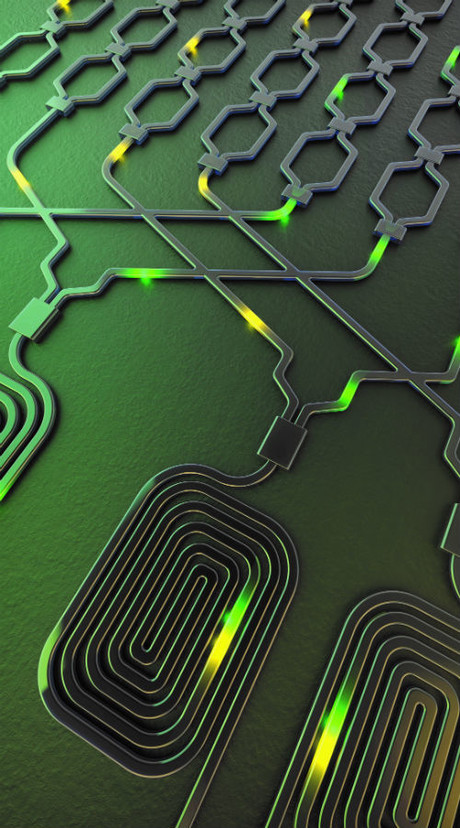 Light may be the missing ingredient in making usable quantum silicon computer chips, according to an international team led by the University of Bristol.

The team has engineered a silicon chip that can guide single particles of light known as photons along optical tracks, encoding and processing quantum bits of information known as ‘qubits’. The results of their work have been published in the journal Nature Photonics.

International effort is growing to develop quantum computers, in order to increase the types of tasks that computers can solve for us. Quantum computers hold the promise of solving complex problems that would be otherwise intractable, such as the ability to predict and design properties of molecules, make sense of data involved in space exploration and build automated navigation systems.

Today’s computers and smartphones are encoded with information called ‘bits’ which take the form of either a ‘1’ or a ‘0’. Quantum computers are instead based on qubits that can be in a superposition of the 0 and 1 states, and multiple qubits can be linked in a special way called quantum entanglement. These two quantum physical properties provide the power to quantum computers.

“Current computers use a binary code — comprising 1s and 0s — to transfer information, but quantum computers have potential for greater power by harnessing the power of qubits,” said Professor Timothy Ralph, a researcher at The University of Queensland and co-author on the study.

“Qubits can be 1 and 0 at the same time or can link in much more complicated ways — a process known as quantum entanglement — allowing us to process enormous amounts of data at once.”

The Bristol team has been using silicon photonic chips — the same technology used to make today’s computer processors — as a way to try to build quantum computing components on a large scale. Now, they have demonstrated that it is possible to fully control two qubits of information within a single integrated chip — meaning any task that can be achieved with two qubits can be programmed and realised with the device.

“What this means is that we’ve effectively created a programmable machine that can accomplish a variety of tasks,” said Professor Ralph.

“And since it’s a very small processor and can be built out of silicon, it might be able to be scaled in a cost-effective way.”

The integrated photonics effort started in 2008 as an answer to the growing concern that individual mirrors and optical elements are just too big and unstable to realise the large complex circuits that quantum computers will require.

“We need to be looking at how to make quantum computers out of technology that is scalable, which includes technology that we know can be built incredibly precisely on a tremendous scale,” said co-author Dr Jonathan Matthews, based at the Quantum Engineering Technology Labs at the University of Bristol.

“We think silicon is a promising material to do this, partly because of all the investment that has already gone into developing silicon for the microelectronics and photonics industries. And the types of devices developed in Bristol … are showing just how well quantum devices can be engineered.”

Lead author Dr Xiaogang Qiang, who undertook the work while studying for a PhD at the University of Bristol and now works at the National University of Defense Technology in China, noted that the new device is “a very primitive processor, because it only works on two qubits, which means there is still a long way before we can do useful computations with this technology”.

“But what is exciting is that it the different properties of silicon photonics that can be used for making a quantum computer have been combined together in one device,” Dr Qiang said.

“This is just too complicated to physically implement with light using previous approaches.”

A surprising result of the experiment is that the quantum computing machine has become a research tool in its own right, with Professor Jingbo Wang from The University of Western Australia stating, “The team have used the silicon chip to perform delicate quantum information experiments with 100,000 different reprogrammable settings.

“One of the experiments is to implement a special class of quantum walk, which allows simultaneous traversing of all possible paths in arbitrarily complex network structures,” Professor Wang said.

According to Professor Ralph, “This is just the beginning; we’re just starting to see what kind of exponential change this might lead to.

“It’s still early days, but we’ve aimed to develop technology that is truly scalable, and since there’s been so much research and investment in silicon chips, this innovation might be found in the laptops and smartphones of the future,” he said.

Image caption: Artist’s illustration of the chip. Tracks called waveguides guide photons in silicon, much like an optical fibre. Spirals of these waveguides are used to generate photons (quantum particles of light) that are then routed around the processor circuit to perform different tasks. Image credit: Xiaogang Qiang/University of Bristol.

The touch-responsive technology is 100 times thinner than existing touchscreen materials and so...