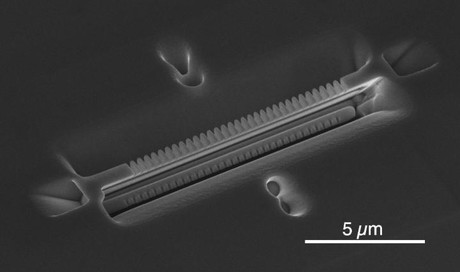 Quantum engineers from the California Institute of Technology (Caltech) have shown that atoms held in optical cavities — tiny boxes to hold light — could be foundational to the creation of a quantum internet. Their work has been published in the journal Nature.

Quantum computers promise to revolutionise information technology, with the very nature of their hardware meaning they will be able to solve problems beyond the reach of classical computers. Scientists are also working on how to connect multiple quantum computers to share data and work together, creating a ‘quantum internet’ that would open the door to several applications — including solving computations that are too large to be handled by a single machine and establishing secure communications using quantum cryptography.

One current model works like this: a single atom or ion acts as a quantum bit (or qubit) storing information via one if its properties, such as the direction of its angular momentum, known as ‘spin’. To read that information and transmit it elsewhere, the atom is excited with a pulse of light, causing it to emit a photon whose spin is entangled with the spin of the atom. The photon can then transmit the information entangled with the atom over a long distance via fibre-optic cable.

Doing that is harder than it sounds, however. Finding atoms that you can control and measure that also aren’t too sensitive to magnetic or electric field fluctuations that cause errors, or decoherence, is challenging.

“Solid-state emitters that interact well with light often fall victim to decoherence; that is, they stop storing information in a way that’s useful from the prospective of quantum engineering,” said Caltech’s Dr Jon Kindem, lead author of the paper.

Meanwhile, atoms of rare-earth elements, which have properties that make the elements useful as qubits, tend to interact poorly with light. To overcome this challenge, researchers led by Caltech’s Professor Andrei Faraon constructed a nanophotonic cavity about 10 µm in length, sculpted from a piece of crystal. The crystal was made in such a way that light inside it would bounce around in predictable patterns.

A charged atom, or ion, of the rare-earth element ytterbium was then placed at the centre of the cavity where it could receive a beam of photons. The optical cavity allows for light to bounce back and forth down the beam multiple times until it is finally absorbed by the ion. By doing this, the researchers were able to control and measure a stable form of quantum information in a solid.

“This ticks most of the boxes,” said Prof Faraon, describing ytterbium as “a rare-earth ion that absorbs and emits photons in exactly the way we’d need to create a quantum network”.

“This could form the backbone technology for the quantum internet,” he said.

The team showed that the cavity modifies the environment of the ion such that whenever it emits a photon, more than 99% of the time that photon remains in the cavity, where scientists can efficiently collect and detect that photon to measure the state of the ion. This results in an increase in the rate at which the ion can emit photons, improving the overall effectiveness of the system.

In addition, the ytterbium atoms store information for 30 ms. That’s long enough for light to transport that information nearly 6000 km — about the distance from Sydney to Jakarta and enough time to cross continental Europe, Asia, Australia or the US.

Study co-author Dr John Bartholomew, who worked on the project at Caltech, added, “These rare-earth atoms have great appeal for quantum technologies but several challenges had to be overcome to get things working at the single atom level. I’ve worked on overcoming these challenges since starting my PhD at The Australian National University 12 years ago.

“I saw the nanophotonic cavities pioneered at Caltech as the best shot for making this breakthrough.”

The team’s current focus is on creating the building blocks of a quantum network, with Prof Faraon saying they hope to scale up their experiments and connect two quantum bits. Meanwhile, Dr Bartholomew now leads the Quantum Integration Laboratory at The University of Sydney Nano Institute and hopes to build on the university’s demonstrated strengths in photonics and quantum technologies.

“The next big steps are to increase the performance and scale of this hardware and I can’t wait to tackle these challenges at the University of Sydney by designing new materials and building integrated devices,” Dr Bartholomew said.