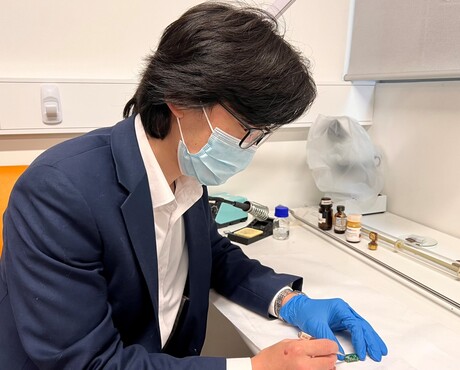 The resulting bismuth-selenide crystals show clear ferromagnetic ordering, a large bulk band gap, high electronic mobility and the opening of a gap of surface state, making the system a good candidate to achieve the quantum anomalous Hall effect (QAHE) at the higher temperatures necessary for viable, sustainable future low-energy electronics. The team’s breakthrough has been published in the journal Physical Review B.

“The combination of electronic and magnetic properties in topological systems is the keystone of novel topological devices,” said project leader Professor Xiaolin Wang, from UOW.

“We have proposed and successfully realised a new way to magnetise a novel electronic material — a topological insulator — by adding two different magnetic ions.”

Each of the various different magnetic elements used in magnetising a topological insulator possesses its own advantage and disadvantage. While in previously studies only one element was employed, the FLEET researchers found that the combination of two elements also combined advantages of each.

“The dual doping strategy is thus proved viable for the growth of extremely high-quality topological insulators with both magnetism and excellent electron mobility, which are vital for low-energy electronic devices,” said lead author Dr Weiyao Zhao, also from UOW.

One dose is not enough

Topological insulators are emergent materials with a unique band structure allowing the study of quantum effect in solids, as well as being promising components of future, high-performance quantum devices. There are the two key elements in the QAHE that ‘drives’ desirable properties in topological insulators and all related electronic technology: ferromagnetism and the topological electronic insulating property.

The collaborative FLEET study, combining expertise from UOW, Monash University and RMIT University, pioneered a ‘dual element’ doping strategy to introduce magnetism in a topological insulator, thus improving both key elements at once. Combining the advantages of both iron and samarium results in large crystal growth, with a large surface band gap, and huge quantum transport effect.

Thus, QAHE has been realised via transition metal doping strategy only at extremely low temperatures, which would require energy-intensive cooling. Again, this reduces the viability of such materials for future low-energy electronics. To increase the operating temperature of QAHE, stronger magnetic interaction and higher mobility are desired.

Achieving the desired elements of QAHE

After considering the successful elements of doping using transition metals such as iron, the research team decided to further introduce a stronger magnet, the rare earth element samarium, into the well-known topological insulator bismuth selenide. The doping elements iron and samarium create the necessary ferromagnetic ordering in the crystals, which can open a massive gap at the Dirac cone of surface state. This is an essential element of achieving QAHE.

Further, the team proved that, in the dual magnetic doped crystals, the electron mobility remains very high, by confirming the presence of an ultrastrong quantum oscillation effect and step-like Hall effect.

The mobility of topological insulators such as bismuth-selenide is several times faster than in classical semiconductors, such as silicon. The resulting crystals show clear ferromagnetic ordering, a large (∼44 meV) band gap, and high mobility (∼7400 cm2/Vs at 3 K) and Hall steps in transverse resistivity, confirming the presence of QAHE.

“The samarium and iron dual-doped Bi2Se3 crystal will be an ideal system to achieve QAHE at higher temperatures,” said corresponding author Dr Mark Edmonds, from Monash University. “This may be a new way to cover the shortage of magnetic elements.

“DFT calculation indicates that the dual doping results in a half-metallicity, fully spin polarised electrons in the system,” concluded Prof Wang. “This paves another avenue to potential applications in spintronics, as well as contributing to the diversity of the topological matter family.”