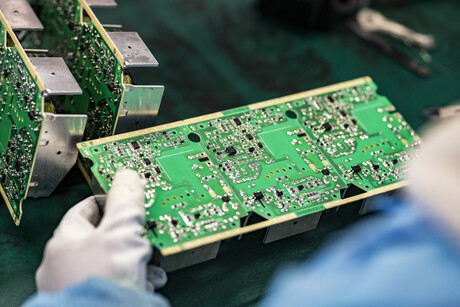 Researchers have used a 110-year-old experiment to solve a scientific mystery that could now help to revolutionise the tiny electronic circuits that control everything from coffee machines to medical implants. The discovery, which was made by a group of students at Queen’s University Belfast, has revealed the electronic properties of an unusual nanoscale material.

Using a modernised version of an old experimental geometry dating back to 1911, the researchers were able to measure the exact electronic properties of a “domain wall”. These are nanoscale, two-dimensional sheets which are embedded in some crystalline materials. Domain walls can be more electronically conducting than the surrounding crystal. They are useful as nanoscale electrical connections, but they can also be created, destroyed and moved around as required. Devices based on these domain walls would be completely reconfigurable — they could entirely change their function or heal themselves if they broke down and all of this could take place rapidly, paving the way for a different kind of electronic circuit.

Scientists have previously found it difficult to examine domain walls in detail. With widths down to only a few atoms, they are very small and not easy to access. Now, researchers have been able to shed light on the materials’ capabilities, which could help create future electrical circuits that can reconfigure and repair themselves. Conor McCluskey, one of the students who led the experiment in the School of Mathematics and Physics at Queen’s University, said the researchers were able to use an experiment that is more than a century old to solve a modern-day mystery within nanotechnology. “We have been able to show in detail exactly how the domain walls conduct electricity. We now know that the electrons that carry the electrical current within these domain walls move exceptionally fast at room temperature. They move at similar speeds to the electrons in graphene — which is a wonder material hailed for its conduction properties, and its discovery warranted a Nobel Prize in 2004,” McCluskey said.

McCluskey said that when an electron is carrying a current it scatters off the atoms in the material. This blocks the electron on its journey and creates electrical resistance. “We have found that charges in these domain walls can move for a very long time before they get scattered — on average they move quite fast. This property itself is quite useful for high-speed electronics, but combined with the fact that the domain walls themselves are entirely mobile and reconfigurable could be a game changer for nanotechnology,” McCluskey said.

McCluskey added that nanotechnology is at a crossroads, as researchers have previously focused on making electronic components smaller and smaller, to fit more into devices and make them more powerful. However, researchers have now reached a point where they can’t go any smaller without affecting the reliability of the components. “The next generation of devices will need to rely on materials which do something different, and mobile domain walls might offer us just that. Our discovery sheds some light on exactly what is happening in these domain walls to make them behave the way they do, and this understanding is key to creating real domain wall devices that work reliably,” McCluskey said.

The research findings were published in Advanced Materials. The researchers from Queen’s University Belfast worked in collaboration with teams from France (Dr Manual Bibes), the US (Professor Alexei Gruverman) and the Republic of Ireland (Professor Ursel Bangert).

Engineers have created a more efficient and flexible AI chip that has the potential to bring the...