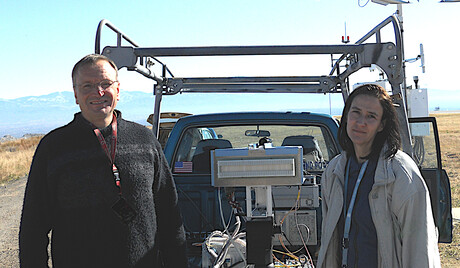 LightSlingers use volume-distributed polarisation currents, animated within a dielectric to faster-than-light speeds, to emit electromagnetic waves; by contrast, traditional antennas employ surface currents of subluminally moving massive particles on localised metallic elements such as dipoles. Owing to the superluminal motion of the radiation source, LightSlingers are capable of ‘slinging’ tightly focused wave packets with high precision towards a location of choice. This gives them potential advantages over phased arrays in secure communications such as 4G and 5G local networks as well as warfighter communications and radar applications.

“We have been developing LightSlingers at Los Alamos for more than 15 years,” said John Singleton, one of the two principal investigators on the project. “They were initially developed as fundamental science models for violent astronomical phenomena, but we soon realised that they were more efficient and considerably more flexible than conventional antennas of a similar size.”

The LightSlingers’ small size, relatively light weight, power efficiency and resiliency against abusive treatment make them more versatile than equivalent conventional antennas. In addition, the antennas can be built in unusual shapes such as flat panels, cylinders or disks that are uniquely optimised to particular situations and applications. For example, they could form part of ceramic armour applied to a tank or unmanned ground vehicle.

Several prototypes of LightSlinger have been tested in lab environments and in the field over distances of up to 76 km, three of which have been independently validated by a US telecommunications company. Los Alamos is now looking to transition the antennas to commercial prototypes that can be field tested and mass-produced by additive manufacturing and robotic processing.

Co-investigator Andrea Schmidt concluded, “Our hope is that LightSlingers will, in the near future, replace outdated base-station antenna technology around the globe and expedite the rollout of 4G.”