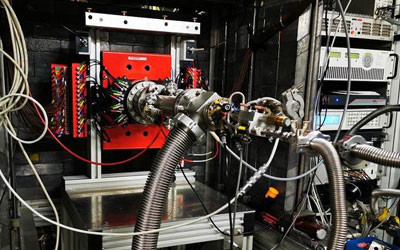 A recent breakthrough from an international team of scientists could result in a new generation of energy-efficient electronics, expected to require less power and generate less heat.

In electronics, a capacitor holds energy in the form of electric charge. A spin capacitor is a variation on that idea: instead of holding just charge, it also stores the spin state of a group of electrons — in effect it ‘freezes’ the spin position of each of the electrons.

That ability to capture the spin state opens up the possibility that new devices could be developed that store information so efficiently that storage devices could get very small. A spin capacitor measuring just 1 in2 could store 100 TB of data.

“At the moment, up to 70% of the energy used in an electronic device such as a computer or mobile phone is lost as heat, and that is the energy that comes from electrons moving through the device’s circuitry,” explained the University of Leeds’ Dr Oscar Cespedes, who supervised the research. “It results in huge inefficiencies and limits the capabilities and sustainability of current technologies.

“With quantum effects that use light and eco-friendly elements, there could be no heat loss. It means the performance of current technologies can continue to develop in a more efficient and sustainable way that requires much less power.”

In conventional computing, information is coded and stored as a series of bits: for example, zeroes and ones on a hard disk. Those zeroes and ones can be represented or stored on the hard disk by changes in the polarity of tiny magnetised regions on the disk. With quantum technology, spin capacitors could write and read information coded into the spin state of electrons by using light or electric fields.

“Our research shows that the devices of the future may not have to rely on magnetic hard disks,” said co-lead author Dr Matthew Rogers, also from the University of Leeds. “Instead they will have spin capacitors that are operated by light, which would make them very fast, or by an electrical field, which would make them extremely energy efficient.

“This is an exciting breakthrough. The application of quantum physics to electronics will result in new and novel devices.”

The research team was able to develop the spin capacitor by using an advanced materials interface made of a form of carbon called buckminsterfullerene (buckyballs), manganese oxide and a cobalt magnetic electrode. The interface between the nanocarbon and the oxide is able to trap the spin state of electrons. The time it takes for the spin state to decay has been extended by using the interaction between the carbon atoms in the buckyballs and the metal oxide in the presence of a magnetic electrode.

The scientists believe the advances they have made can be built on, most notably towards devices that are able to hold spin state for longer periods of time.

Image caption: A sample of the advanced material undergoing analysis by muon spectroscopy. A muon is a subatomic particle.