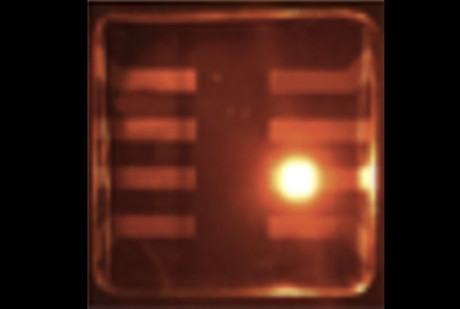 Scientists at the Los Alamos National Laboratory (US) have incorporated meticulously engineered colloidal quantum dots into a new type of LED containing an integrated optical resonator, which allows them to function as lasers. These novel, dual-function devices clear the path towards versatile, manufacturing-friendly laser diodes.

For the past two decades, the Los Alamos quantum dot team has been working on fundamental and applied aspects of lasing devices based on semiconductor nanocrystals prepared via colloidal chemistry. These particles, also known as colloidal quantum dots, can be easily processed from their native solution environment to create various optical, electronic and optoelectronic devices. Furthermore, they can be ‘size-tuned’ for lasing applications to produce colours not accessible with existing semiconductor laser diodes.

In a study published in the journal Nature Communications, the researchers successfully resolved several challenges on the path to commercially viable colloidal quantum dot technology. In particular, they demonstrated an operational LED, which also functioned as an optically pumped, low-threshold laser. To achieve these behaviours, the team incorporated an optical resonator directly into the LED architecture without obstructing charge-carrier flows into the quantum dot emitting layer.

By carefully designing the structure of their multilayered device, the team could achieve good confinement of the emitted light within the ultrathin quantum dot medium on the order of 50 nm across. This is key to obtaining the lasing effect and, at the same time, allowing for efficient excitation of the quantum dots by the electrical current. The final ingredient was home-made quantum dots perfected for lasing applications per recipes developed by the team over the years of research into the chemistry and physics of these nanostructures.

The colloidal quantum dot lasers can be manufactured using cheaper, simpler methods than modern semiconductor laser diodes that require sophisticated, vacuum-based, layer-by-layer deposition techniques. Solution-processable lasers can be produced in less-challenging lab and factory conditions, and could lead to devices that would benefit a number of emerging fields — including integrated photonic circuits, optical circuitry, lab-on-a-chip platforms and wearable devices.

The scientists are now tackling the remaining challenge, which is boosting the current density to levels sufficient for obtaining so-called ‘population inversion’ — the regime when the quantum dot active medium turns into a light amplifier.

“This latest breakthrough along with other recent advances in quantum dot chemistry and device engineering that we have achieved suggest that laser diodes assembled from solution may soon become a reality,” said Victor Klimov, head of the quantum dot group at Los Alamos. “Quantum dot displays and television sets are already available as commercial products. The colloidal quantum dot lasers seem to be next in line.”