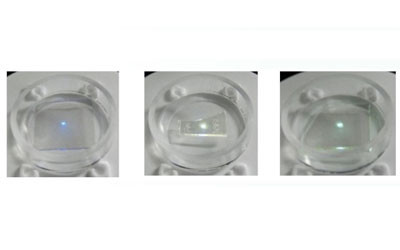 Carbon impurity has long hindered efficiency in nitride-based electronic and optical devices, but now researchers at Tohoku University have discovered a method that can quickly detect carbon impurity using light.

The use of blue and white light-emitting diodes (LEDs) that use nitride semiconductors — specifically indium gallium nitride (InGaN) and gallium nitride (GaN) — has led to a steep increase in energy efficiency. Naturally, researchers have tried to replicate this in optical and electronic applications by using nitride semiconductors. However, a common issue arises due to carbon impurity, which significantly degrades performance.

Carbon impurity leads to deep traps — an undesirable electronic defect by which performance is substantially reduced. Furthermore, detecting carbon impurity in semiconductor crystals is a time-consuming and costly process; some methods necessitate the creation of additional electrodes on the crystal, thus raising costs and inhibiting the inspection speed. Other methods result in the breakage of nitride crystals, rendering the crystals useless.

Associate Professor Kazunobu Kojima and his team have now created a way to identify carbon impurity using a probing technique utilising light that makes no physical contact with the crystals. The technique is named omnidirectional photoluminescence (ODPL) spectroscopy and described by the researchers in the journal Applied Physics Express.

The process of ODPL first involves illuminating a crystal, such as GaN, via external light. The external light is absorbed by the crystal, thereby stimulating it. In order to return to its initial state, the crystal creates light to dissipate excess energy.

“Optical probing technologies are immensely beneficial due to their non-destructive nature,” Assoc Prof Kojima said. “By using light, we can therefore help detect carbon impurity which is ultimately such a hindrance for GaN devices, such as LEDs and power transistors.”

An added benefit of the ODPL spectroscopy is that it is not only limited to nitride-semiconductor-based applications — it can check any light-emitting materials that contain optical and electronic properties. An example would be perovskites, which are currently used in the manufacture of high-efficiency solar cells.