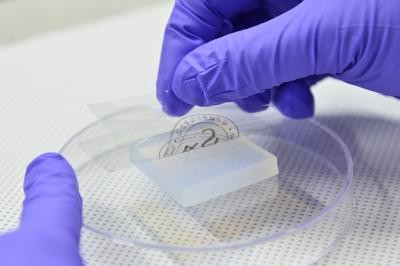 With interest in wearable devices increasing rapidly, there is growing demand for technologies that allow for the production of high-performance sensors on surfaces of various shapes and types.

Now, researchers from the Post-silicon Semiconductor Institute at the Korea Institute of Science and Technology (KIST) have developed transfer-printing technology that uses hydrogel and nano ink to easily create high-performance sensors on flexible substrates of diverse shapes and structures. Their work has been described in the journal Nano Letters.

Transfer printing is a process for producing electrical devices via which electrodes are printed on a transfer mould and then transferred to a final substrate. It works in a way similar to that of a tattoo sticker: just as sticking the tattoo sticker onto the skin and then removing the paper section leaves the image on the skin, a structure is created on one surface and then transferred onto another.

This process largely avoids the difficulties involved in creating devices directly on substrates that are thermally and/or chemically sensitive, which is why transfer printing is widely used for the manufacturing of flexible devices. On the other hand, the primary disadvantage of current transfer printing processes is that they can usually only be used for substrates with flat surfaces. The KIST team overcame this limitation by developing a simple transfer printing process that allows for the creation of high-performance, flexible sensors on topographic surfaces.

Using the porous and hydrophilic nature of hydrogels, the KIST team inkjet-printed an aqueous solution-based nano ink onto a hydrogel layer, which was solidified onto a topographic surface. The surfactant and water in the nano ink passed quickly through the hydrogel’s porous structure, leaving only the hydrophobic nanomaterial (the particles of which are greater in length than the diameter of the holes in the hydrogel) remaining on the surface and allowing for the creation of the desired electrode pattern.

The amount of nano ink used for this printing process was very small, allowing for the rapid formation of electrodes. The electrical performance of the electrodes was said to be very good, due to the high levels of purity and uniformity of the resulting nano networks. Because of the hydrophobic nature of the nanomaterial, there was a low degree of interaction between it and the hydrogel, allowing for the easy transfer of the electrodes to diverse topographic surfaces.

The KIST team developed a technology for transferring nanonetworks by employing a method that solidifies a mouldable elastomeric fluid onto a hydrogel surface, enabling the easy creation of flexible electrodes even on substrates with rough surfaces. The team transferred nanoelectrodes directly onto a glove to create a modified sensor that can immediately detect finger movements. It also created a flexible, high-performance pressure sensor that can measure the pulse in the wrist.

“The outcome of this study is a new and easy method for creating flexible, high-performance sensors on surfaces with diverse characteristics and structures,” said Dr Hyunjung Yi, leader of the research team. “We expect that this study will be utilised in the many areas that require the application of high-performance materials onto flexible and/or non-traditional substrates, including digital health care, intelligent human-machine interfaces, medical engineering and next-generation electrical materials.”

Top image: It is easy transferring electrodes from the hydrogel (bottom) to the PET film (top) with the transfer-printing technology that was developed at KIST’s Post-ailicon Semiconductor Institute. Image credit: Korea Institute of Science and Technology (KIST).

The all-digital phase-locked loop — a critical clocking circuit that is used in virtually...