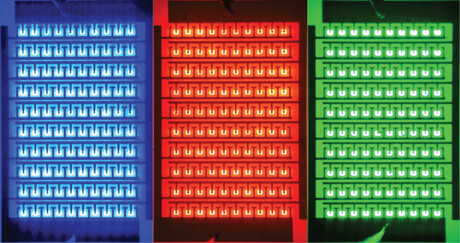 Micrometre-scale light-emitting diodes (μLEDs) are the ideal building block for next-generation displays used in head-mounted monitors, mobile phones and televisions because they are bright, respond quickly, offer longevity and consume little energy. Researchers from the King Abdullah University of Science and Technology (KAUST) have now shown that these scaled-down devices can efficiently emit light across the entire visible-light spectrum.

Just as with conventional LED displays, full-colour μLEDs products will require arrays of blue, green and red light sources. Nitride-based alloys are a group of semiconducting materials that offer one route to achieving this because, with the right chemical mix, they can emit all three colours. However, when nitride devices are reduced in size to micrometre scales, they become very poor emitters of light.

“The main obstacle to reducing the size of the devices is the damage to the sidewalls of the LED structure generated during the fabrication process,” said KAUST PhD student Martin Velazquez-Rizo. “Defects provide an electrical path for a leakage current that does not contribute to the light emission.” This effect gets worse as the size of the LED shrinks, which has limited the LED size to approximately 400 x 400 μm.

Velazquez-Rizo, along with his colleagues Zhe Zhuang, Daisuke Iida and Kazuhiro Ohkawa, have developed bright red indium gallium nitride µLEDs of just 17 x 17 μm. The team used a thoroughly calibrated atom deposition technique to create a 10 x 10 array of red μLEDs; the damage to the μLED sidewalls was then eliminated using a chemical treatment.

“We confirmed with atomic-scale observations that the sidewalls had high crystallinity after the treatment,” Velazquez-Rizo said.

As published in the journal Photonics Research, the team observed very high output power of 1.76 mW from each square millimetre on the device’s surface — a notable improvement on previous devices that reported an output power of less than 1 mW/mm2. The team then demonstrated their red μLEDs with green and blue indium gallium nitride μLEDs to create a wide colour-range device.

“The next step in our research is to further improve the efficiency of our μLEDs and decrease their lateral dimensions below 10 μm,” Velazquez-Rizo said.