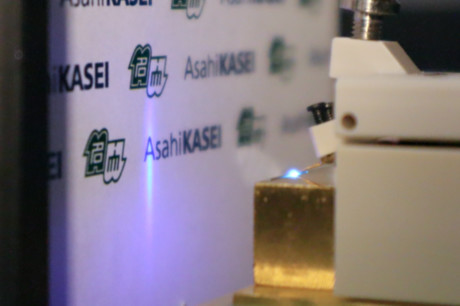 Nagoya University scientists, in cooperation with Asahi Kasei Corporation, have succeeded in designing a laser diode that emits deep ultraviolet light — a breakthrough that has since been published in the journal Applied Physics Express.

The deep-ultraviolet laser diode overcomes several issues encountered by scientists in their work towards the development of these semiconducting devices. For starters, the team used a high-quality aluminium nitride (AlN) substrate as their base for building up the layers of the laser diode. This was necessary since lower-quality AlN contains a large number of defects, which ultimately impact the efficiency of a laser diode’s active layer in converting electrical into light energy.

In laser diodes, a ‘p-type’ and ‘n-type’ layer are separated by a ‘quantum well’. When an electric current is passed through a laser diode, positively charged holes in the p-type layer and negatively charged electrons in the n-type layer flow towards the centre to combine, releasing energy in the form of light particles called photons. The researchers designed the quantum well so that it would emit deep UV light.

The aluminium content in the p-side cladding was designed so that it was highest at the bottom, decreasing towards the top. The researchers believe this aluminium gradient enhances the flow of positively charged holes. A top contact layer was finally added that was made from p-type AlGaN doped with magnesium.

The researchers found that the polarisation doping of the p-side cladding layer meant that a pulsed electric current with low operating voltage of 13.8 V was needed for the emission of what they described as “the shortest wavelength reported so far”.

“Our laser diode emits the world’s shortest lasing wavelength, at 271.8 nm, under pulsed [electric] current injection at room temperature,” said Professor Chiaki Sasaoka, of Nagoya University’s Center for Integrated Research of Future Electronics. Previous efforts in the development of ultraviolet laser diodes had only managed to achieve emissions down to 336 nm, he said.

Laser diodes that emit short-wavelength ultraviolet light, which is called UV-C and is in the wavelength region of 200 to 280 nm, could be used for disinfection in health care, for treating skin conditions such as psoriasis, and for analysing gases and DNA. The team is now conducting advanced joint research with Asahi Kasei Corporation to achieve continuous room temperature deep-UV lasing for the development of UV-C semiconductor laser products.