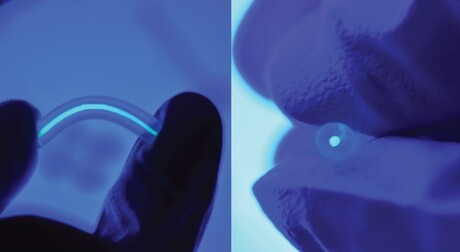 In free-space and underwater optical wireless communication systems, there is often a trade-off between the size of a photodetector and its bandwidth, with larger-area devices capturing more light but at the expense of a slower maximum data speed. Now, researchers from the King Abdullah University of Science and Technology (KAUST) have developed an elegant solution to this problem.

The researchers designed and fabricated luminescent polymer optical fibres doped with nanocrystals of CsPbBr3 that act as a large-area scintillator. The idea is that the fibres absorb an optical data signal transmitted in the violet spectral region (around 400 nm) and then re-emit it in the green region (around 510 nm) so that it can be detected by a fast avalanche photodetector.

The result is a detector system that is omnidirectional and can be scaled to large areas and operate at a data transmission speed of hundreds of megabits per second, making it especially attractive for fast underwater optical communications. It has been described in the journal Optics Express.

“We hope to pave the way toward the full-scale commercialisation of optical-based wireless network systems that offer high bandwidth capacity, lower latency and faster data rates than existing micro- and millimetre-wave technology,” said KAUST postdoc Chun Hong Kang. “This includes bringing the optical wireless internet system to the underwater environment, where the existing technology based on acoustic and radio-frequency (RF) waves suffers significantly in terms of the data rate due to the high attenuation in water.”

Experimental tests conducted at a wavelength of 405 nm show that the team’s detector system offers a 3 dB bandwidth of 13.1 MHz, allowing data transmission speeds of up to 152.5 Mbps. However, researcher Boom Ooi is confident that this performance can be pushed even further by optimising the properties of the nanocrystals used. He is now working closely with material scientists at KAUST with this goal in mind.

“The primary limiting factor for the modulation bandwidth of fibre-based detectors is the recombination lifetime of the perovskite-based luminescent material embedded within the polymer fibres,” Ooi said. “We anticipate that perovskite-based luminescent material — with a faster recombination lifetime in the range of picoseconds allowing a gigahertz bandwidth — can be realised in the future through several synthesis and optimisation strategies.”

The use of several perovskite nanocrystals of different compositions, each emitting light at a different wavelength, could also enable simultaneous transmission and detection of multiple wavelength channels to further boost data capacity.