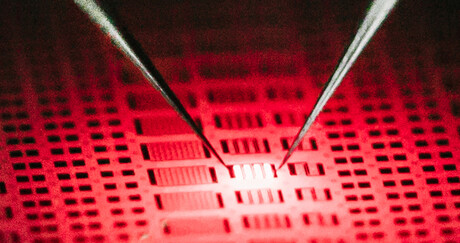 A new micro-light-emitting diode (micro-LED) developed at the King Abdullah University of Science and Technology (KAUST) can efficiently emit pure red light, and it may help in the quest to develop full-colour displays based on just a single semiconductor, according to a new study published in the journal Optics Letters.

Micro-LEDs are a promising technology for the next generation of displays, with the advantage of being energy efficient and very small, but each LED can only emit light over a narrow range of colours. A clever solution is to create devices that combine many different LEDs, each emitting a different colour; full-colour micro-displays can be created by combining red, green and blue (RGB) micro-LEDs.

Red-light-emitting indium gallium nitride can be created by increasing the materials’ indium content. But this tends to lower the efficiency of the resulting LED because there is a mismatch between the separation of atoms in the GaN and InGaN, which causes atomic-level imperfections. Moreover, damage to the sidewalls of an InGaN micro-LED induced during the fabrication process makes the new device less efficient.

“But we have a chemical treatment to remove the damage and retain the high crystal quality of the InGaN and GaN sidewall interface,” said KAUST’s Zhe Zhuang, whose team created and characterised a series of square devices with a side length of 98 or 47 µm.

The 47 µm-long devices, emitting light at a peak wavelength of 626 nm, were shown to have an external quantum efficiency — the number of photons emitted from the LED per electron injected into the device — of up to around 0.87%. Also, the colour purity of the red micro-LED is optimum because it is very close to the primary red colour defined by the industrial standard known as Rec. 2020.

“The next step is to increase the efficiency of the red micro-LED with even smaller chip sizes, maybe below 20 µm,” said Zhuang. “Then we hope to integrate RGB nitride-based LEDs for full-colour displays.”