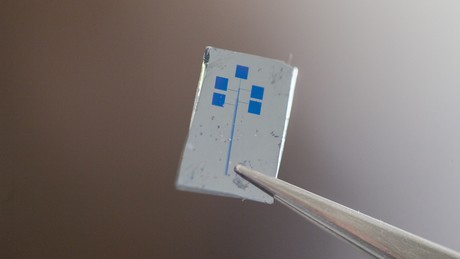 A team of engineers led by The Australian National University (ANU) have invented a semiconductor with organic and inorganic materials that can convert electricity into light very efficiently — and is thin and flexible enough to help make devices such as mobile phones bendable.

Described in the journal Advanced Materials, the invention also opens the door to a new generation of high-performance electronic devices made with organic materials that will be biodegradable or easily recyclable, promising to help substantially reduce e-waste.

The organic component has the thickness of just one atom — made from just carbon and hydrogen — and forms part of the semiconductor that the ANU team developed. The team grew the organic semiconductor component molecule by molecule, in a similar way to 3D printing — a process called chemical vapour deposition.

The inorganic component, meanwhile, has the thickness of around two atoms. The hybrid structure can convert electricity into light efficiently for displays on mobile phones, televisions and other electronic devices. 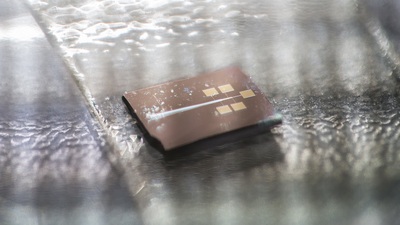 The ANU team’s semiconducting material, which cannot be seen with the naked eye, sits in between gold electrodes on the chip that is a functional transistor. The electrodes serve as electricity input and output points. The chip, which is only 1 x 1 cm, can hold close to a thousand transistor circuits. Image credit: Jack Fox, ANU.

“For the first time, we have developed an ultrathin electronics component with excellent semiconducting properties that is an organic-inorganic hybrid structure and thin and flexible enough for future technologies, such as bendable mobile phones and display screens,” said ANU Associate Professor Larry Lu, lead senior researcher on the project.

According to ANU PhD researcher Ankur Sharma, a co-author on the study, experiments have shown the performance of the team’s semiconductor would be much more efficient than conventional semiconductors made with inorganic materials such as silicon. He said, “We have the potential with this semiconductor to make mobile phones as powerful as today’s supercomputers.

“The light emission from our semiconducting structure is very sharp, so it can be used for high-resolution displays and, since the materials are ultrathin, they have the flexibility to be made into bendable screens and mobile phones in the near future.”

“We characterised the optoelectronic and electrical properties of our invention to confirm the tremendous potential of it to be used as a future semiconductor component,” Assoc Prof Lu added.

“We are working on growing our semiconductor component on a large scale, so it can be commercialised in collaboration with prospective industry partners.”