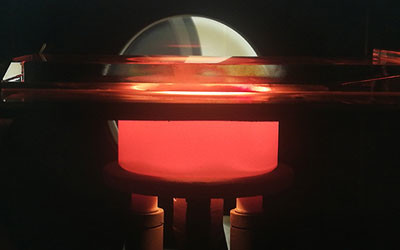 Pure red LEDs are vital for building the next generation of energy-efficient micro-LED displays to follow OLED displays and for creating lighting with colour tuning — but making such LEDs from nitride crystals is a goal that has so far been difficult. Now electrical engineers from King Abdullah University of Science and Technology (KAUST) have found a solution, as published in the journal Applied Physics Express.

This means engineers need to find one material that is suitable for manufacturing all three colours. The material should be able to produce each colour with high intensity, and ideally it should have a high-power output but use relatively little battery voltage.

The best candidates for generating all three colours are a family of compounds called nitride semiconductors. These are crystals containing nitrogen that in theory can be used to create LEDs that produce light with wavelengths between ultraviolet and infrared, which includes the entire visible spectrum. Engineers usually use gallium nitride to make blue and green LEDs, but they have struggled to make bright red LEDs with this crystal.

Replacing a large portion of the gallium with the element indium gives the desired red, but it is hard to do because indium easily evaporates from the crystal. So Iida, Ohkawa and colleagues created a reactor with extra indium vapour above the crystal’s surface — a process known as metalorganic vapour-phase deposition. This added pressure prevents the indium in the crystal from escaping.

“This gives us a higher indium concentration at the surface,” Ohkawa said. “That’s our secret!”

But there was another hurdle to overcome. Indium is made of larger atoms than gallium, so when it is introduced, it creates defects in the crystal, degrading the quality of output light. The team’s trick was to also add aluminium, which has small atoms.

“The introduction of the small atoms reduces the strain on the crystal, resulting in fewer crystal defects,” Iida said.

“Another advantage is that the LEDs operate at about half the voltage of its competitors,” Ohkawa added. “This will give you a longer lifetime for batteries.”

A recent breakthrough could result in a new generation of energy-efficient electronics, expected...