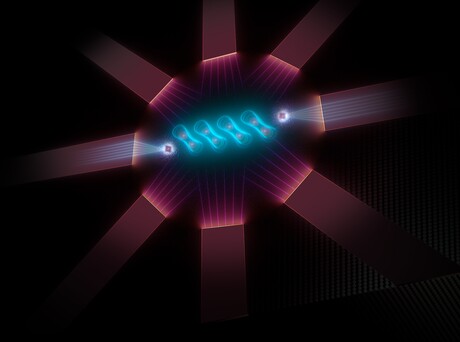 Australian quantum computing manufacturer Silicon Quantum Computing (SQC) has developed what is claimed to be the world’s first integrated circuit manufactured at the atomic scale. The breakthrough comes less than a decade after the company’s founder, Michelle Simmons, contributed to the fabrication of the world’s first functioning single-atom transistor.

Delivery of the atomic-scale integrated circuit, which operates as an analog quantum processor, has been achieved two years ahead of schedule. SQC has already used this quantum processor to model the quantum states of a small, organic polyacetylene molecule — something that traditional computers would struggle to do — proving the validity of the company’s technology for modelling quantum systems. Their modelling has been described in the journal Nature.

To achieve the quantum integrated circuit, SQC needed to realise three separate technological feats of atomic engineering: the creation of small dots of atoms of uniform size so that their energy levels aligned and electrons could easily pass through them; the ability to tune the energy levels of each dot individually, but also of all dots collectively, to control the passage of quantum information; and the ability to control the distances between the dots with sub-nanometre precision so that the dots were close enough but remained independent for the quantum coherent transport of electrons across the chain.

“This is a major breakthrough,” said Simmons, who was named Australian of the Year in 2018 for her work in quantum physics.

“Today’s classical computers struggle to simulate even relatively small molecules due to the large number of possible interactions between atoms. Development of SQC’s atomic-scale circuit technology will allow the company and its customers to construct quantum models for a range of new materials, whether they be pharmaceuticals, materials for batteries or catalysts. It won’t be long before we can start to realise new materials that have never existed before.”

The result is also a validation of SQC’s atomic manufacturing capabilities. To build the processor, SQC had to integrate multiple atomic components within a single device, which it did from its facility in Sydney.

“The exquisite precision of the device validates SQC’s technical strategy to focus on quality as opposed to quantity,” Simmons said. “We have created a superbly precise manufacturing technology that is opening the door to a whole new world. It is a huge step towards building a commercial quantum computer.”

The breakthrough quantum processor meets the stringent requirements for scaling quantum computing hardware, representing a major technical milestone on the road to achieving the company’s goal of delivering an error-corrected processor. SQC is now scaling its quantum hardware to take on heavy-duty computational tasks that cannot be performed by traditional computers.