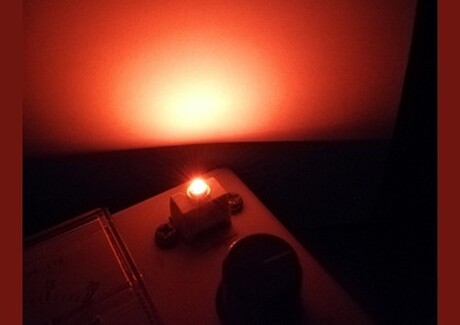 In an effort to optimise the performance of light-emitting diodes (LEDs), researchers from King Abdullah University of Science and Technology (KAUST) are looking at every aspect of the design, fabrication and operation of these devices. Now they have succeeded in fabricating red LEDs, based on the naturally blue-emitting semiconductor indium gallium nitride, that are as stable as those based on indium gallium phosphide.

LEDs are optical sources made from semiconductors that offer improvements on conventional visible-light sources in terms of energy saving, smaller size and longer lifetimes. LEDs can emit across the spectrum, from the ultraviolet to blue (B), green (G), red (R) and into the infrared. Arrays of tiny RGB devices, so-called micro-LEDs, can meanwhile be used to make vivid-colour displays, which could underpin the next generation of monitors and televisions.

A major challenge facing the development of micro-LEDs is to integrate red, green and blue light into a single LED chip. Current RGB LEDs are made by combining two kinds of materials: red-light LEDs are made of indium gallium phosphide (InGaP), while blue and green LEDs comprise indium gallium nitride (InGaN) semiconductors. But integrating two material systems is difficult.

“Creating RGB displays requires the mass transfer of the separate blue, green and red LEDs together,” said KAUST researcher Zhe Zhuang. An easier solution would be to create different-coloured LEDs all on a single semiconductor chip.

Since InGaP semiconductors are unable to emit blue or green light, the only solution to making monolithic RGB micro-LEDs is to use InGaN. This material has the potential to shift its emission from blue to green, yellow and red by introducing more indium into the mix. InGaN red LEDs have been predicted to have better performance than the current InGaP ones.

Zhuang and colleagues have now succeeded in growing high-quality indium-rich InGaN to fabricate red LEDs using the nanofabrication facilities at the KAUST Core Labs. The team also developed excellent transparent electrical contacts using a thin film of indium-tin-oxide (ITO), which allows for a current to pass through their InGaN-based amber and red LEDs.

“We have optimised the fabrication of the ITO film to realise low electrical resistance and high transmittance,” Zhuang said.

The team demonstrated that these characteristics significantly improved the performance of InGaN red LEDs. They also carefully studied InGaN red LEDs of different sizes and at various temperatures. Changes in temperature affect the output light power and cause different colour impressions, making them crucial for practical device performance.

The team developed an InGaN red LED structure where the output power is more stable than that of InGaP red LEDs. Its emission colour shift at high temperatures was also less than half of those made with InGaP.

The research has been published in the journals Applied Physics Letters and Optics Express.

Ultralow-power devices could harvest their own energy

An international research team has created a way for ultralow-power printed electronics to...

Researchers have found a way to fabricate tiny energy storage devices that can effectively power...

Tech school students ahead of the game