Speeding up computation with nanophotonics 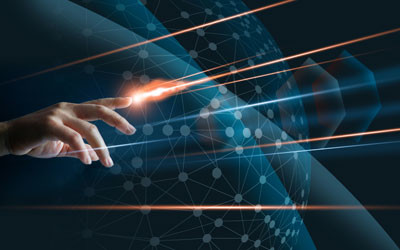 Japanese researchers have developed a new type of processor known as PAXEL — a device that can potentially bypass Moore’s law and increase the speed and efficiency of computing. Described in the journal APL Photonics, PAXEL is placed at the front end of a digital computer and optimised to perform specific functions but with less power consumption than is needed for fully electronic devices.

Metal-oxide semiconductor field-effect transistors are the basis for most integrated electronic circuits, but they are limited by Moore’s law, which says the number of microprocessor chips on a single electronic circuit will double every two years. There is an inherent limit to this, though, based on the way the size of the microprocessor chips relates to the quantum mechanical nature of electrons.

It is possible to partially overcome the Moore’s law problem by using parallel processing, in which multiple processors carry out simultaneous computations; however, this approach does not work for every application. So the researchers decided to use light for the data transport step in integrated circuits, since photons are not subject to Moore’s law. Instead of integrated electronic circuits, much new development now involves photonic integrated circuits (PICs); the PAXEL accelerator takes this approach and uses power-efficient nanophotonics, which are very small PICs.

Nanophotonics, such as those used in PAXEL, operate at the speed of light and can carry out computations in an analog fashion, with data mapped onto light intensity levels. Multiplications or additions are then performed by varying light intensity. The investigators considered different PAXEL architectures for a variety of uses, including artificial neural networks, reservoir computing, pass-gate logic, decision-making and compressed sensing.

One particularly interesting application of PAXEL is in so-called fog computing. This is like cloud computing but uses computational resources (servers) near the ‘ground’ where the originating event occurs. A compact PAXEL attached to a tablet or other handheld device could detect signals and transmit the information through a 5G wireless link to nearby fog computing resources for data analysis.

Applications of the technology are expected in a wide array of areas, including medical and veterinary point-of-care testing, diagnostics, drug and food testing, and biodefence. As more of our household and business devices are connected through the web, better computing capacity, including data transport with higher energy efficiency, will be needed, and advances such as PAXEL are expected to help meet these needs.