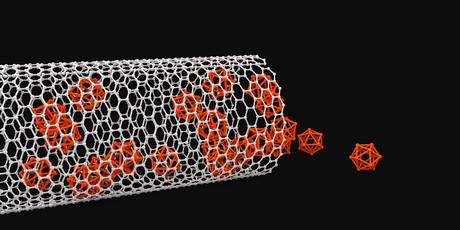 Japanese researchers have created single-molecule nanowires, complete with an insulation layer, up to 10 nm — and found that forcing the ribbon-like chains to be flat significantly improved their conductivity compared with a twisted conformation. Published in The Journal of Physical Chemistry Letters, their findings may allow for a new generation of inexpensive high-tech devices, including smartphone screens and photovoltaics.

Carbon-based polymers, which are long molecular chains made of repeating units, can be found everywhere, from the rubber in the soles of your shoes to the proteins that make up your body. We used to think that these molecules could not conduct electricity, but that all changed with the discovery of conducting polymers — a small subset of carbon-based molecules that can act like tiny wires owing to their alternating single and double chemical bonds, also called conjugated bonds. Since carbon-based conductors are much easier and cheaper to make and customise than conventional electronics, they have seen rapid adoption in OLED TVs, iPhone screens and solar panels.

Now, researchers at Osaka University have synthesised chains of oligothiophene of various lengths, with up to 24 repeat units. This means that single nanowires could be up to 10 nm in length. Insulation of the wires was needed to avoid interwire currents, so that the intrinsic conductivity of a single molecule could be measured accurately.

On the basis of the rules of quantum mechanics, electrons in molecules behave more like spread out waves than localised particles. The overlapping bonds in oligothiophene allow electrons to be entirely spread out over the polymer backbone, so they can easily transverse the molecule to create an electrical current. This charge transport can occur in two very different ways.

“Over short distances electrons rely on their wave-like nature to ‘tunnel’ directly through barriers, but over long distances they hop from site to site to reach their destination,” said Dr Yutaka Ie, first author on the study.

The team found that changing the oligothiophene chain from twisted to flat led to much greater overlap of the conjugated backbone of oligothiophene, which in turn meant a larger overall conductivity. As a result, the crossover from tunnelling to hopping conduction took place with flat chains at shorter chain lengths, compared with those with the twisted conformation.

The researchers believe their work could open a whole new world of devices, with lead author Dr Yoshio Aso stating, “This study demonstrates that our insulated nanowires have the potential to be used in novel ‘single-molecule’ electronics.”