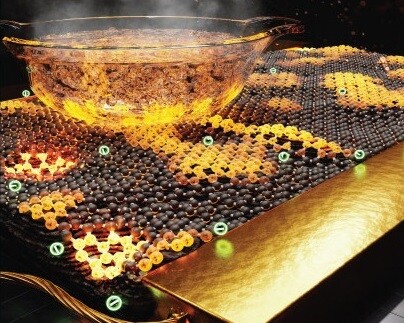 Researchers at the King Abdullah University of Science and Technology (KAUST) have created thin graphite films that could act as high-performance flexible heater panels, reaching several hundred degrees within seconds when low voltage is applied. The key to the material’s impressive heating performance is graphene domains within the graphite film.

As outstanding thermal conductors, graphitic carbon nanomaterials are increasingly used for heat management; for example, to dissipate heat from microchips. The same materials could also be used as electric heaters.

“There’s a need to develop low-power, flexible heater panels, and nanocarbons are key contenders,” said G Deokar, a postdoc in the lab of Pedro Costa. “So far, however, their electrothermal performance has been limited.” This is because nanocarbon-based heaters commonly require an input of 20–60 V to reach a 250°C target temperature, and they can also degrade rapidly when heated in air.

Costa, Deokar and colleagues recently developed a method to manufacture nanoscale-thick graphite films (NGFs) at wafer scale. They also were able to easily transfer them to arbitrary substrates, without the residues often present in graphene panels. “These characteristics of the NGF prompted us to investigate their application in thermal management technologies,” Deokar said.

When the team placed NGFs on flexible Kapton sheets and applied gold electrodes, their heater performance was found to be superior to previously reported nanocarbon heaters. Applying less than 8 V, the material hit a target temperature of 300°C within seconds. Cooling was equally rapid, according to results published in ACS Applied Materials and Interfaces.

“We also observed outstanding stability and showed the NGF could be used as an external reusable patch to boil water,” Deokar said. Other potential applications for the material could range from miniature heaters for sensors or microfluidic devices to industrial-scale heaters, such as aviation defoggers or space heat regulators.

“We operated them at double the maximum temperature of other nanocarbons (with roughly half the power input) and the useful heating area was also augmented, meaning the efficiency of the panel was considerably better,” Costa added.

The team’s working understanding is that the NGF’s excellent performance is due to the presence of graphene domains and wrinkles in the material, which act as hotspots. “These structural features are distributed all over the NGF surface, explaining the high temperatures and uniform heat spread,” Deokar said.