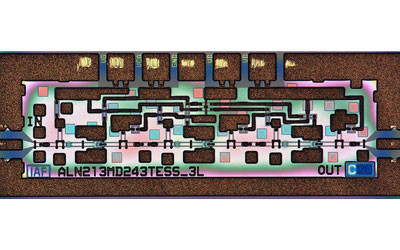 Scientists at the Fraunhofer Institute for Applied Solid State Physics IAF have succeeded in developing a novel type of transistor with extremely high cut-off frequencies: metal–oxide–semiconductor HEMTs, or MOSHEMTs. The transistor is expected to enable even smaller and more powerful devices, having already reached record frequencies of 640 GHz.

The high-frequency characteristics of high-electron-mobility transistors (HEMTs) have steadily improved in the past years, with the transistors becoming increasingly faster by downscaling the gate length to 20 nm. However, a HEMT encounters a problem at such small structure sizes: the thinner the barrier material of indium aluminium arsenide (InAlA) becomes, the more electrons leak from the current carrying channel through the gate. These unwanted gate leakage currents have a negative impact on the efficiency and durability of the transistor, which renders further downscaling attempts impossible. The current transistor geometry of a conventional HEMT has thus reached its scaling limit.

Silicon MOSFETs (metal–oxide–semiconductor field-effect transistors) are no stranger to this problem; however, they possess an oxide layer that can prevent unwanted leakage currents for longer than is the case with HEMTs. With this in mind, researchers at Fraunhofer IAF combined the advantages of III-V semiconductors and Si MOSFETs and have replaced the Schottky barrier of a HEMT with an isolating oxide layer. The result is a new type of transistor: the metal oxide semiconductor HEMT.

“We have developed a new device which has the potential to exceed the efficiency of current HEMTs by far,” said Dr Arnulf Leuther, a researcher at Fraunhofer IAF. “The MOSHEMT allows us to downscale it even further, thus making it faster and more efficient.”

With the new transistor technology, Dr Leuther and his team have succeeded in achieving a record with a maximum oscillation frequency of 640 GHz. According to Dr Leuther, “This surpasses the global state of the art for any MOSFET technology, including silicon MOSFETs.”

To overcome the gate leakage currents, the scientists had to use a material with a significantly higher barrier than the conventional Schottky barrier. They replaced the semiconductor barrier material with a combination of isolating layers consisting of aluminium oxide (Al2O3) and hafnium oxide (HfO2).

“This enables us to reduce the gate leakage current by a factor of more than 1000,” said Dr Axel Tessmann, a scientist at Fraunhofer IAF. “Our first MOSHEMTs show a very high development potential, while current field effect transistor technologies have already reached their limit.”

The extremely fast MOSHEMT is designed for the frequency range above 100 GHz and is therefore especially promising for novel communication, radar and sensor applications. In the future, high-power devices will ensure a faster data transmission between radio towers and enable imaging radar systems for autonomous driving as well as higher resolution and precision of sensor systems. And while it will take some years until the MOSHEMT reaches commercial application, the researchers have already succeeded in realising an amplifier MMIC (monolithic microwave integrated circuit) based on indium gallium arsenide (INGaAs) MOSHEMTs for the frequency range between 200 and 300 GHz — said to be a world first.