Where nanotechnology, the IoT and Industry 4.0 meet 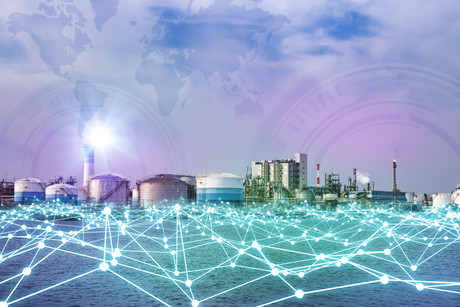 The Internet of Things (IoT), Industrial Internet of Things (IIoT) and Industry 4.0 are significantly growing due to advances in the ability to record more accurate data and automated data analysis methods. Recent software, algorithm and machine learning advances enabled the automation of many sensor networks to the point where an operator is not required unless notified by the system itself.

These new sensor networks and data manipulation approaches are used in applications ranging from smart buildings to industrial production processes — where each environment is readily optimised based on the trends of the recently obtained data against the historical data. In many cases, they can automatically change the internal conditions themselves and will only notify the operator if an issue occurs or the data trends show that downtime is imminent. This has provided much higher efficiencies to a range of industries.

While nanotechnology is not everybody’s first thought when they think of the IoT, there are already ways in which nanotechnology is helping to propel this area of data optimisation; and there will be areas that are likely to be used commercially in the future. These areas range from the initial point of measurement to building an information exchange network using nanomaterials.

Improving the capability of sensors

The incorporation of nanomaterials as the ‘sensing materials’ into various types of sensors is well documented, with much greater efficiencies being afforded by their use. The small size of nanomaterials — in particular, 2D materials such as graphene — often provides a high surface area that can detect changes in an environment. Now, not every sensing mechanism is the same — some are remote, some are through absorption of molecules and some are in response to a physical change (among others).

Nanomaterials have various properties that enable these mechanisms to work efficiently — whether it is through measurable optical changes in the distance, adsorbing atoms at its surface or the ability to be flexed, stretched or compressed. Some nanomaterials can perform at least one, if not all, of these mechanisms. The high sensitivity, and therefore more accurate data points, is often due to the high electrical conductivity and charge carrier mobility of nanomaterials. When something is sensed (through adsorption, physical change, etc), the sensing mechanism invokes a change in the electrical conductivity of the nanomaterial, which is then detected as a measurable response. Because the conductivity and charge carrier mobility within a nanomaterial are often high (ie, high-conductivity nanomaterials are usually used), the sensitivity is high, as very slight changes to the conductivity will provide a detectable response.

The Internet of Nano Things (IoNT)

The second area where nanotechnology can be combined with the IoT is in the creation of a physical network composed of nanomaterials that facilitate the exchange of data through different components communicating with each other at the nano level. This is known as the Internet of Nano Things (IoNT). In terms of development, it is not yet at the level of other IoT systems, but it is attracting interest from the communication and medical sectors. One such example is in field-based applications, where remote sensing is required, or for measuring different points within a human body.

How the system works

As with any system, there are multiple components, and the IoNT is no different. There are also two common ways that these components communicate with each other, and these are through electromagnetic nanocommunication (transmission and receiving of electromagnetic waves) and molecular communication (information encoded in molecules). As for the components themselves, there are four main areas of the IoNT that help to facilitate the transfer of information — these are nano nodes, nano-routers, nano-micro interface devices and gateways.

Nano nodes are the simplest and smallest component within the IoNT set-up and are seen as a basic nanomachine. These small nanomachines are used to transmit data and perform basic computations. However, their small size (and energy) limits the distance that they can transmit data, and they possess a very small internal memory. Nevertheless, they can be placed in a specific location and transmit data to a larger nano-router, which then transmits the data over longer distances. Therefore, the nano nodes can often be the actual sensor component of the system.

The nano nodes pass the data on to the nano-router, which is a nanomachine with a much larger computational power. Because they possess a much higher computational power, they act as an aggregator for all the surrounding nano nodes that obtain the initial data. They can then control the exchange commands between the nano nodes and send the information to the nano-micro interface device. These interface devices aggregate all the data from the nano-routers and transmit the data to the microscale (and vice versa) using a combination of nano-communication techniques and classical network protocols. The gateway then acts as the controller of the whole system and enables the data to be accessed anywhere via the internet.

Industry 4.0 is only just emerging and will continue to advance in the coming years. That is a given. However, even though conventional data transferring, cloud computing and data manipulation approaches are used across many industries now, there may come a point — just like computing — where the transfer of data needs to occur through much smaller architectures. When the immediate need is there commercially, the groundwork being put into the IoNT will enable it to be used when Industry 4.0 really takes a hold across all industry sectors.

*Liam Critchley is a writer, journalist and communicator who specialises in chemistry and nanotechnology and how the fundamental principles at the molecular level can be applied to many different application areas. Liam is perhaps best known for his informative approach and explaining complex scientific topics to both scientists and non-scientists. Liam currently has over 350 articles published across various scientific areas and industries that cross over with both chemistry and nanotechnology.

Embedded server technology for the edge of smart grids

Allowing people to break away from monotony and make their own choices is known to increase...

As data science continues to grow and evolve, new challenges are cropping up that companies must...