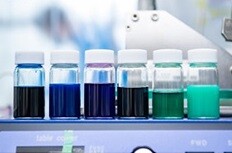 A research team led by Japan’s National Institute for Materials Science (NIMS) has developed a new conductive ink for use in printed electronics with significantly improved resistance to oxidation. After the ink is printed, it self-organises into a conductive pattern with a copper core–nickel shell nanostructure. The researchers say that use of this cheaper, more stable ink may help popularise printed electronics.

Silver nanoparticle inks are currently the most commonly used in printed electronics. However, these inks are expensive and poorly compatible with soldering. Copper nanoparticle inks have been considered a viable, cheaper alternative but are extremely susceptible to oxidation, making them unsuitable for use in printed electronics. Development of more stable and economical inks was therefore required.

The NIMS researchers focused on inks composed of complexes of organic amine ligands with a central metallic ion because they are stable in the air. The team subsequently discovered that inks containing a mixture of different metallic complexes are capable of converting into different types of printed metallic patterns, including multilayered core–shell nanostructures and alloys, depending on the ink’s composition and other conditions.

Based on these findings, the team developed an ink composed of a mixture of copper and nickel complexes able to self-organise into a copper core–nickel shell nanostructure. Because its outer nickel layer is resistant to oxidation, this printed pattern is significantly more resistant to oxidation than patterns printed using conventional copper inks.

The addition of fine copper powder to this ink is expected to increase its ability to form thicker layers. The team is currently designing this new ink formulation in collaboration with the developers of the copper powder: Sumitomo Metal Mining and Priways. These companies plan to release sample ink products in the near future.