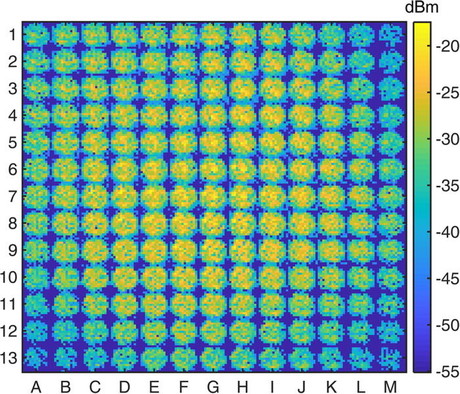 Using the same technology that allows high-frequency signals to travel on regular phone lines, US researchers tested sending extremely high-frequency, 200 GHz signals through a pair of copper wires. The result is a link that can move data at rates of terabits per second — significantly faster than currently available channels.

While the technology to disentangle multiple, parallel signals moving through a channel already exists, thanks to signal processing methods developed by the inventor of digital subscriber lines (DSL), questions remained related to the effectiveness of implementing these ideas at higher frequencies. To test the transmission of data at higher frequencies, researchers used experimental measurements and mathematical modelling to characterise the input and output signals in a waveguide, with the results published in the journal Applied Physics Letters.

The team used a device with two wires running parallel inside a sheath with a large diameter that facilitates increased mixing of the waveguide modes. These mixtures enable the transmission of parallel noninterfering data channels. Higher frequencies allow larger bandwidth and more data to travel through a channel, if the architecture of the channel is such that the data is not garbled by interference.

“To confirm and characterise this behaviour, we measured the spatial distribution of energy at the output of the waveguide by mapping the waveguide’s output port, showing where the energy is located,” said Brown University’s Daniel Mittleman, corresponding author on the study.

The researchers created a 13 x 13 mm grid for the output of each possible input condition, resulting in a 169 x 169 channel matrix that provides a complete characterisation of the waveguide channel. The results demonstrate a superposition of waveguide modes in the channel and allow estimation of data rates.

“It is exciting to show that a waveguide can support a data rate of 10 terabits per second, even if only over a short range — that’s well beyond what anybody has previously envisioned,” Mittleman said. “Our work demonstrates the feasibility of this approach to high-rate data transmission, which can be further exploited when the sources and detectors reach the appropriate level of maturity.”

The researchers intend to further investigate ohmic losses — a function of the resistance of each of the cell components and caused by the metal hardware of the waveguide, which dictate the limit on the length of the channel. Their work could be used in applications that require large amounts of data to move quickly over short distances, such as between racks in a data centre or for chip-to-chip communication.

Image caption: A 13 x 13 mm measurement for each of the 169 possible locations of the signal input location of the waveguide. These measurements reveal multiple maxima in each 13 x 13 spot, confirming a superposition of modes in the signal propagating through the waveguide. Image courtesy of the study authors.

Scientists have created a unidirectional device that increases the quality of transmitted signals...

Charge your smartphone on an outdoor table

Consumers now have the ability to recharge a phone by placing it on a table with innovative...